Vajpayee, the 1st Indian leader to address UNGA in Hindi

It is said that Vajpayee, who was also fluent in English, was the force behind uplifting Hindi to the international platform by using the language at the UN each time he delivered a speech. 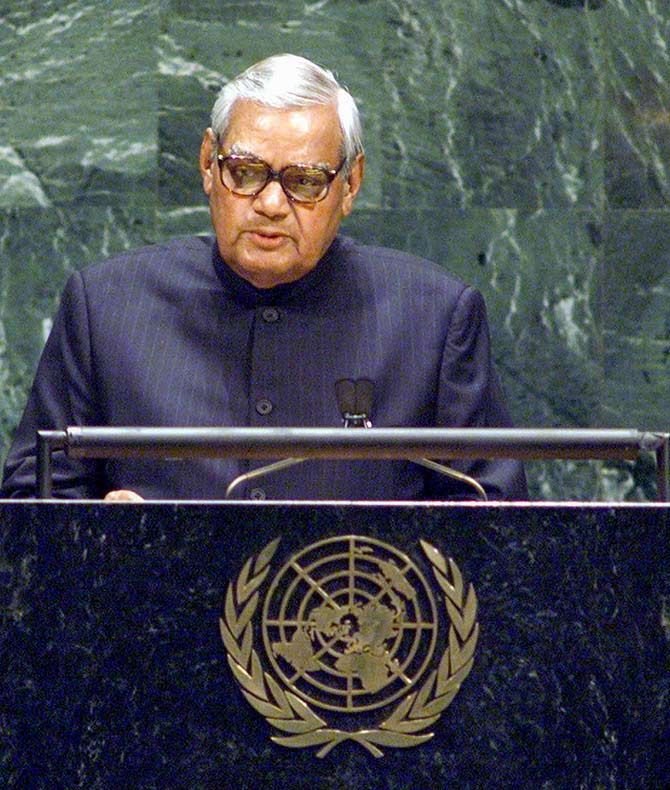 Vajpayee, in his role as foreign minister and prime minister, visited the UN headquarters to deliver speeches to the UNGA on seven occasions from 1977 to 2003.

Known for his great oratory skills, Vajpayee first addressed the UNGA's 32nd session in 1977 as the foreign minister under the Janata Party government headed by then prime minister Morarji Desai.

"I am a newcomer to the United Nations, but India is not, having been associated actively with the organisation from its very inception.

"As one who has been a parliamentarian in my own country for two decades and more, I feel a special sense of exhilaration in attending this assembly of nations for the first time," Vajpayee said in the historic address.

It was the first time that an Indian leader had delivered the speech in Hindi at the UNGA as other Indian leaders had opted to speak in English, the dominant language at the forum.

It is said that Vajpayee, who was also fluent in English, was the force behind uplifting Hindi to the international platform by using the language at the UN each time he delivered a speech.

He touched the subject of the Non-Aligned Movement and said that the India "stands firmly for peace, non-alignment and friendship with all countries."

"The vision of Vasudhaiva Kutumbakum -- the world is one family -- is an old one. We in India have all along believed in the concept of the world as one family," Vajpayee said.

In his speech, he said that India looks forward to consolidating the process of normalisation of relations with Pakistan, not only to ensure durable peace, but to promote beneficial bilateral co-operation.

In 1978, Vajpayee again visited the UNGA as the foreign minister and raised the issue of nuclear disarmament.

"There is no let-up in the arms race either quantitatively or qualitatively. Disarmament is still a distant goal; and the probability of a nuclear war looms over us like a menacing shadow.
"India believes that partial measures such as the creation of zones free of nuclear weapons comprising the nuclear 'have-nots' are not likely to generate any genuine feeling of security unless there is, at the same time, significant progress towards nuclear disarmament," he said.

"India has demonstrated that democracy can take root in a developing country.

"I am confident that the Indian experience will prove that democracy can also provide the basis for stable, long-term economic growth in developing societies. That is the path that the people of India have chosen, and I stand before the Assembly today as the symbol of this new resurgent," he said.

In 2000, Vajpayee went to the UNGA to address the Millennium Summit of the UN. He spoke about terrorism, the danger of a nuclear war and India's nuclear programmes.

"The danger of nuclear war remains a serious threat to global peace and security in the new era whose arrival is marked by this summit.

"India was forced to develop these weapons in 1998 because the principal nuclear-weapon States refused to accept the almost-universal demand for disarmament. Moreover, the spread of nuclear weapons in our neighbourhood made us especially vulnerable," Vajpayee said.

He returned to address the UNGA's 56th session in 2001 and talked about the policy of sponsoring terrorism by some states as the session was being held in the shadow of the 9/11 attacks.

"We in India know from our own bitter experience that terrorists develop global networks driven by religious extremism. Their operations are supported by drug trafficking, money laundering and arms smuggling.

"Some states follow a policy of sponsoring and sheltering them. Terrorists can only be countered through closely coordinated efforts of the international community," he said.

In 2002, Vajpayee again raised the issue of state-sponsored terrorism and nuclear blackmail in South Asia in his address at the 57th session of the UNGA.

"In our South Asian region, nuclear blackmail has emerged over the past few months as a new arrow in the quiver of state-sponsored terrorism.

"Dark threats were held out that actions by India to stamp out cross-border terrorism could provoke a nuclear war," he warned.

Vajpayee's last address at the UNGA came in 2003 when he criticised the world body at the 58th session, saying "the United Nations has not always been successful in preventing conflicts or in resolving them and cited the example of Iraq.

He said that "we need to introspect on some of the assumptions that have been made over the years concerning the will and reach of the UN.

"We realised that the United Nations does not possess magical powers to solve every crisis in all parts of the globe or to change overnight the motivation of leaders and communities around the world."

Vajpayee said that there is a need to clearly recognise, with a sense of realism, the limits to what the United Nations can achieve, and the changes of form and function required for it to play an optimal role in today's world.

A 10-time Lok Sabha member, Vajpayee announced his retirement from politics in 2005.

He died  in New Delhi on Thursday at the age of 93. 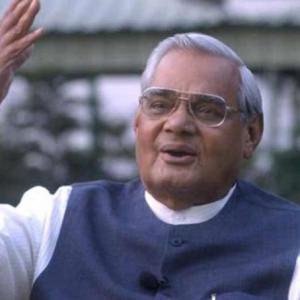