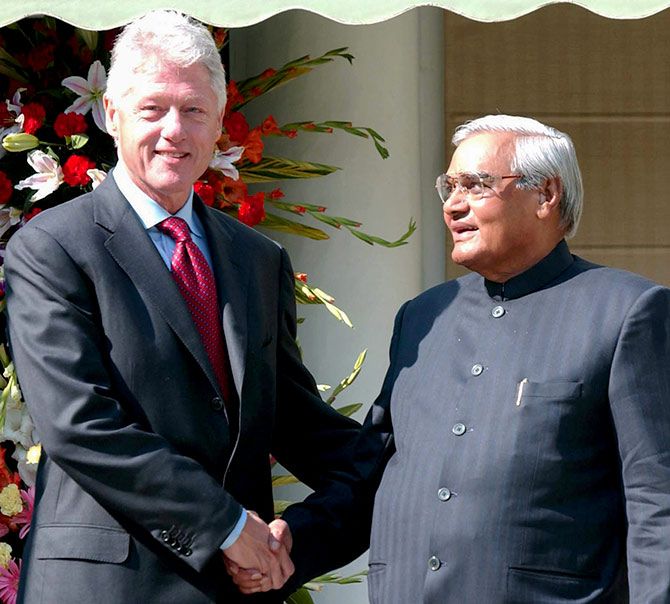 Atal Bihari Vajpayee recognised early on that the United States-India partnership would contribute to the world's economic prosperity and security and the two democracies continue to benefit from his vision, US Secretary of State Michael Pompeo has said while condoling the death of the former prime minister.

Vajpayee, one of India's most charismatic leaders and inspirational orators, died on Thursday at the age of 93. His death was announced by the All India Institute of Medical Sciences (AIIMS) hospital where he was admitted on June 11 with a variety of ailments.

AIIMS said his condition was stable for the last nine weeks, but it deteriorated over the last 36 hours and he was put on life support systems.

'On behalf of the people of the United States of America, I extend my heartfelt condolences to the people of India on the recent passing of Former Prime Minister Atal Bihari Vajpayee,' Pompeo said in a statement on Thursday.

He said Indians will reflect on Vajpayee's many contributions that led to India's rise as a global and economic power.

'He championed tirelessly for his country's development and demonstrated a devotion to improving the lives of every Indian,' Pompeo said.

The top US diplomat recalled Vajpayee's address to the United States Congress in 2000, when he had famously characterised US-India ties as a 'natural partnership of shared endeavours'.

Vajpayee 'recognised early on that the United States and India, based on their shared democratic values, could develop a partnership that would contribute to the economic prosperity and security of the region and the world. Today, our two countries and our bilateral relationship continue to benefit from Prime Minister Vajpayee's vision, which helped promote expanded cooperation', Pompeo said.

He said the American people stand with the people of India 'as we mourn Prime Minister Vajpayee's passing'.

"Today, we hold the people of India in our thoughts and prayers," Pompeo added.