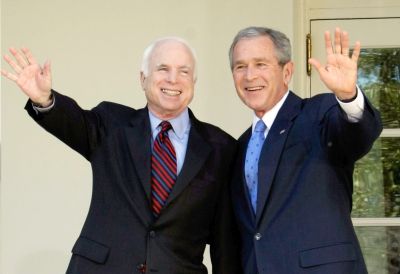 The 71-year-old Arizona Senator won the Republican presidential nomination, eight years after he lost it to President Bush.

Earlier, President Bush, invited McCain to the White House for a warm endorsement.

"John showed incredible courage and strength of character and perseverance in order to get to this moment and that is exactly what we need in a President," he said.

McCain appreciated the President gesture and said, "I intend to have as much possible campaigning events together as is in keeping with the President's heavy schedule."

Despite his low approval rating, Bush is very popular among conservative Republicans, whose support McCain needs to win the general election. Bush can also help in fund raising.

McCain is a veteran pilot during the Vietnam War. He was shot down during a bombing mission and was a prisoner of war in Vietnam for five-and-a-half years. If successful, he would be the oldest American ever elected to a first term as President.