'We are the only country in the world where everybody gets a digital vaccination certificate immediately... Then as we open up, as they did yesterday, which I think is a welcome move, you will have lots and lots of points where people will come in' 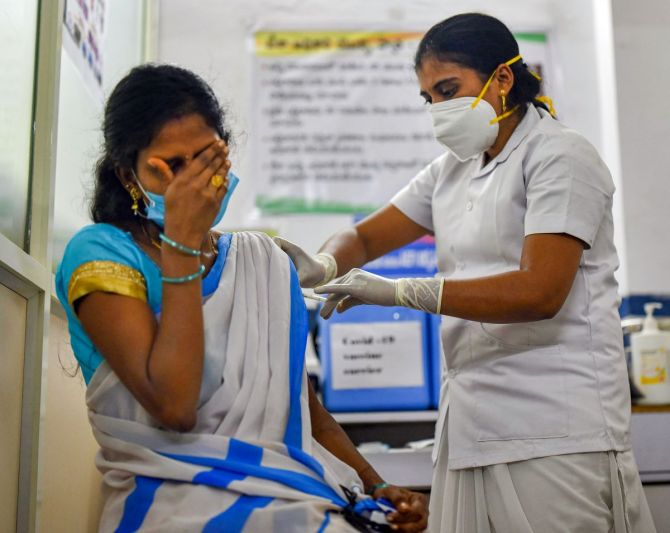 IMAGE: The first dose of the Covishield vaccine being administered to a frontline worker at a health centre in Visakhapatnam, January 16, 2021. Photograph: PTI Photo

India can scale up its COVID-19 vaccination efforts to inoculate 5-10 million people a day by adopting a streamlined approach using technology and having over 50,000 vaccination points, Infosys co-founder Nandan Nilekani said on Tuesday.

Welcoming the government's decision to open up vaccination to people over 18 years starting May 1, Nilekani said a lot of technology enhancements have already been made to make the system scalable that is now handling vaccination of 2-3 million people a day.

"I had laid out the road map about nine or 10 months ago on how we need a scalable digital infrastructure for vaccinating 5-10 million people a day and I think a lot of that actually is reflected in the latest version.

"For example, we are the only country in the world where everybody gets a digital vaccination certificate immediately... Then as we open up, as they did yesterday, which I think is a welcome move, you will have lots and lots of points where people will come in," he said.

Explaining further, Nilekani, who is referred to as the architect for Aadhaar, said this needs to be done in a streamlined manner.

"Let's say 50,000 vaccination points, then it will be very easy to go to 5-10 million. Already we were at 2-3 million a day and a lot of credit goes to R S Sharma, who took over the National Health Authority just a couple of months back, and brought in a lot of technological enhancements that have made the system scalable.

"Obviously, we need the vaccines and people to give the vaccines to but digital backbone is important and India has developed something that is truly remarkable," he said.

The former UIDAI chairman said face authentication is being used for vaccination and not face recognition.

Nilekani added that facial recognition is scanning a database to look for a person. "No such thing is being contemplated, just face authentication because people are often not able to use fingerprint, it's a way of being inclusive."

He also said this will help in accelerating vaccination, and the transaction time would be very important.

He further stated that technology is an important tool to help citizens provide access to quality healthcare, education, and financial services.

He was speaking at the first edition of Microsoft ExpertSpeak, in conversation with Microsoft India President Anant Maheshwari.

Maheshwari said digital skilling is a step towards bridging the existing digital divide in the country.

In this direction, Microsoft Corp has helped over 30 million people in 249 countries gain access to digital skills, of which close to 3 million are from India, he said.

The top executive outlined a number of initiatives being run by the company in collaboration with NSDC, Nasscom and others towards cybersecurity and imparting digital skills.

"It's really about government, industry, and companies coming together," he added. 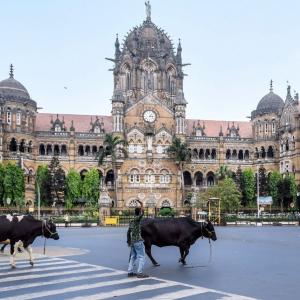