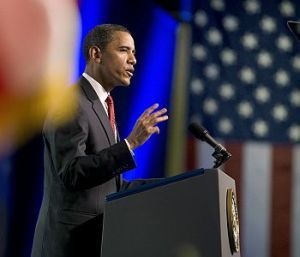 This is in "response" to North Korea's "ongoing provocative, destabilising and repressive actions and policies, particularly its destructive and coercive cyber-attack" on Sony Pictures Entertainment, the White House Press Secretary Josh Earnest said in a statement.

In an executive order, Obama authorised the Secretary of the Treasury to impose sanctions on individuals and entities associated with North Korea.

"We take seriously North Korea's attack that aimed to create destructive financial effects on a US company and to threaten artists and other individuals with the goal of restricting their right to free expression," he said.

"Our response to North Korea's attack against Sony Pictures Entertainment will be proportional, and will take place at a time and in a manner of our choosing. Today's actions are the first aspect of our response," Earnest said.

"Today's actions are driven by our commitment to hold North Korea accountable for its destructive and destabilising conduct," said Jacob J Lew, Secretary of the Treasury.

"Even as the FBI continues its investigation into the cyber-attack against Sony Pictures Entertainment, these steps underscore that we will employ a broad set of tools to defend US businesses and citizens, and to respond to attempts to undermine our values or threaten the national security of the US," said Lew.

"The actions taken today under the authority of the President's new executive order will further isolate key North Korean entities and disrupt the activities of close to a dozen critical North Korean operatives," Lew said.

The US blames North Korea for a cyber attack on Sony Pictures that saw the release of a trove of embarrassing emails, scripts and other internal communications, including information about salaries and employee health records.

However, North Korea has denied its involvement in the hack.

The new sanctions escalates financial pressure on North Korea, including its agencies, instrumentalities, and controlled entities, by authorising targeted sanctions that would deny designated persons access to the US financial system and prohibit US persons from engaging in transactions or dealings with it.