US provided info, equipment to India during China standoff

The United States provided some information, cold-weather clothing and some other equipment to India during its recent border crisis with China, which has adopted an increasingly assertive military posture to exert pressure and expand its influence across the region, a top Pentagon commander has told American lawmakers. Admiral Philips Davidson, Commander of the US Indo-Pacific Command, also told the powerful Senate Armed Services Committee on Tuesday that China's recent activities along the Line of Actual Control have opened India's eyes to what cooperative effort with others might mean for their own defensive needs as he observed that New Delhi, in the very near term, will deepen its engagement with the Quad.

"India has long had an approach called strategic autonomy, you know, a nonaligned approach with others, but I think certainly the activities along the Line of Actual Control with China has opened their eyes to what cooperative effort with others might mean for their own defensive needs," Admiral Davidson told lawmakers during the Congressional hearing.

"We have provided some information to India in that crisis, cold-weather closing, clothing, some other equipment, some things like that, and over the last several years, we have been deepening our maritime cooperation," he said.

China moved over 60,000 well-armed troops who were mobilised for annual exercises, to contentious areas like Pangong Lake in eastern Ladakh in May last year, prompting India to match the PLA's mobilisation which led to an over eight-month long standoff.

After lengthy rounds of talks, the two sides simultaneously withdrew troops from Pangong Lake area last month while talks are on for the withdrawal of soldiers from the rest of the areas along the Line of Actual Control (LAC) in eastern Ladakh.

"I think you will see India in the very near term, you know, remain committed to their non-aligned approach, but I think they will deepen their engagement with the Quad, and I think that's a key strategic opportunity for us, Australia, and Japan," Davidson said, ahead of the maiden Quad Leaders' Summit involving the top leaders from Australia, India, Japan and the United States on Friday.

During the summit, the Quad leaders will discuss regional and global issues of shared interest, and exchange views on practical areas of cooperation towards maintaining a free, open and inclusive Indo-Pacific region.

The Admiral was responding to a question from Senator Angus King. "That would be a geopolitical major development if India more closely aligned with those other countries," King said responding to the answer from the admiral.

"India has always been a neutral country, if you will. Are we developing a stronger alliance with them? You mentioned them as part of the Quad. Do they consider themselves a member of something of that nature?" King asked.

Admiral Davidson also said that the current state of US-India relations presents a historic opportunity to deepen bilateral defence ties and solidify what he described as the “defining partnership of the 21st century”.

The US and Indian navies are now securely sharing information, and India has substantially increased its acquisition of US defence equipment, he said.

The United States strongly supports India's establishment of an information fusion centre focusing on maritime domain awareness, which will improve maritime security in the Indian Ocean Region and Bay of Bengal, he said.

The two countries, he said, concluded several agreements, including the Communications Compatibility and Security Agreement in 2018, which has greatly enhanced information sharing and interoperability.

The Industrial Security Annex, signed in December 2019 allows for the transfer of technologies in support of defence production while the Basic Exchange and Cooperation Agreement allows sharing of unclassified geospatial information. The two countries also signed in October 2020 an agreement on Navy-to-Navy Information Sharing.

"Defence sales are at an all-time high with India operating US-sourced platforms such as P-8s, C-130Js, C-17s, AH-64s, CH-47s, Precision Guided-Excalibur Munitions, and M777 howitzers," he told lawmakers adding that in February, India agreed to acquire Apache and MH-60R multi-mission helicopters worth $3.1 billion and is considering other US systems.

USINDOPACOM defines the security relationship with India as a strategic imperative, Davidson said.

"We expect substantial progress on interoperability and information sharing, service-level and joint military-to-military cooperation and exercises like TIGER TRIUMPH and MALABAR, and an increase in quadrilateral collaboration between India, Australia, Japan, and the United States as the relationship continues to mature,” he said. 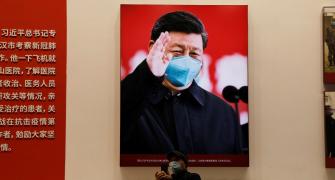 US stood with India during LAC standoff: WH official