China on Thursday slammed the US for appointing a special coordinator for Tibetan issues, describing Washington's move as political manipulation aimed at destabilising Tibet. 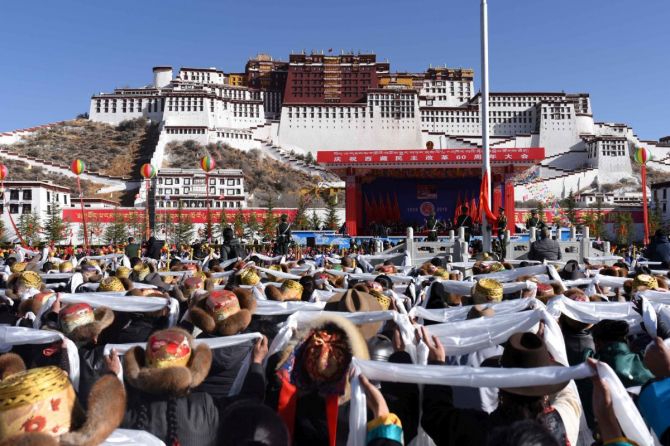 IMAGE: People raise Tibetan scarfs before the flag-raising ceremony during an event to mark the 60th anniversary of Tibetan democratic reforms, in front of the Potala Palace, in March this year. Photograph: Reuters.

US Secretary of State Mike Pompeo on Wednesday named Robert Destro, assistant secretary of state for democracy, human rights and labour, as the special coordinator for Tibetan issues.

Destro will focus on advancing dialogue between the Communist-run government in Beijing and the Dalai Lama, protecting the distinct religious cultural and linguistic identity of Tibetans, improving respect for their human rights and much, much more, Pompeo said.

He said, "The setting up of the so-called special coordinator for Tibetan issues is entirely out of political manipulation to interfere in China's internal affairs and destabilise Xizang", the Chinese name for Tibet.

Unlike in the past, Chinese officials in recent times have been referring to Tibet only as Xizang.

"China firmly opposes that and never recognise that. People of ethnic groups in Xizang are part of the big family of Chinese nation,” Zhao said.

"Since its peaceful liberation, Xizang enjoyed prosperous economic growth, harmonious civil society and prosperous culture. People enjoyed solidarity and mutual assistance and improved livelihood. All people in Tibet enjoy their full religious freedoms and their rights are fully respected and guaranteed," he said.

"We believe Tibet's future will be better. The US should stop interfering in China's internal affairs under the pretext of Tibet or destabilising it. China will take all necessary measures to uphold our interests," he said.

Since last year, the Trump administration stepped up criticisms of China's handling of Tibet especially the issue of appointment of the Dalai Lama's successor.

Last November, China objected to US plans to take up the issue of a successor to the Dalai Lama to United Nations, saying Washington is “misusing” the UN platform to interfere in its internal affairs.

China has been asserting that its assent to successor to the present Dalai Lama is a must as the Tibetan spiritual leader turned 85 this year.

Relations between Washington and Beijing have spiralled downward since the outbreak of the novel coronavirus, which President Donald Trump has blamed on China.

The two countries have also sparred over China imposing a new national security law in Hong Kong, restrictions on American journalists, treatment of Uyghur Muslims and security measures in Tibet. 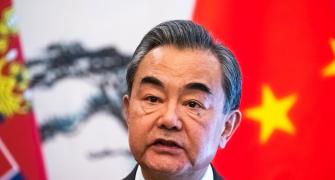