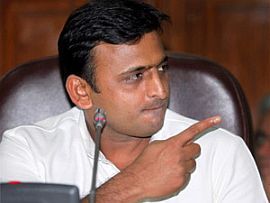 Moments after Samajwadi Party UP chief Shivpal Yadav announced candidates for nine assembly seats besides changing the candidates of 14 constituencies today, Uttar Pradesh Chief Minister Akhilesh Yadav said he was "not aware" of the decision, while adding that candidates may be changed in future.

"I do not have any information. I am at present inaugurating this building. Tomorrow I will start metro work in Kanpur. In future, more candidates will be changed," he said at the sidelines of an event.

On being asked about giving party ticket to Aman Mani Tripathi, son of a murder accused, and refusing the ticket to Atul Pradhan, who is considered close to him from Sardhan (Meerut), Akhilesh said, "I have given up all my rights. All the rights are with people".

On being quizzed further over the issue, he said, "Now I can either be truthful or political. I cannot change some of my habits."

Earlier in the day, the ruling SP declared the candidates for nine assembly seats besides changing the candidates of 14 constituencies ahead of the 2017 UP polls.

Subhash Rai from Jalalpur (Amebedkar Nagar), Mohd Irshad from Nakud (Saharanpur), Sanjay Yadav from Obra (Sonebhadra), Usha Verma from Sandi (Hardoi) are the others who were given SP tickets, he said.

Besides them, the party state president also changed the candidates of 14 constituencies including that of Sardhana seat in Meerut, where Pintu Rana has been given the ticket instead of Akhilesh's close aide Atul Pradhan.

Pradhan, former state president of SP Chhatra Sabha is considered close to Akhilesh. He had fought the 2012 polls against BJP Sangeet Som and ended up at the third place.

The others who got the party tickets included Pakshalika Singh, who has replaced Vinod Kumar Sikarwar from Khairagarh seat, and Chandra Bhushan Singh Bundela alias Guddu Raja who replaced Jyoti Lodhi from Lalitpur.

Later today, a meeting was held at SP supremo Mulayam Singh Yadav's residence in which Ramgopal Yadav, Shivpal Yadav and Akhilesh were present.

"There are no differences in the party over ticket distribution," Ramgopal said.

When asked about giving ticket to Aman Mani, Ramgopal said he was given a ticket in 2012 also.

On being asked about Akhilesh's ignorance about the latest round of ticket distribution, Ramgopal added, "It was the work of state president and there is nothing wrong in it."