Voting for first phase of UP polls begins

Nearly 2.6 crore people in 73 constituencies of western Uttar Pradesh are voting on Saturday in the first of the seven phases of high-stake assembly elections, seen as a litmus test for Prime Minister Narendra Modi's nearly three-year rule. 839 candidates, including from main contenders the Bharatiya Janata Party, the Bahujan Samaj Party, allies the Congress and the Samajwadi party, the Rashtriya Lok Dal as well independents, are in the fray from the seats in 15 districts where 26,823 polling stations have been set up.

Among the electorate are 1.17 crore women and 1,508 belonging to third gender category. The largest constituency in terms of electorate is Sahibabad, while Jalesar is the smallest.

The maximum number of 26 candidates are in fray from Agra South, while the least number of aspirants are in Hastinapur which has six candidates.

In 2012, both the SP and the BSP bagged 24 seats each, with Rashtriya Lok Dal headed by Ajit Singh bagging nine and the Congress five and the BJP 11.

The BJP is hoping to improve its performance as it had swept the state in the 2014 general elections, which gave the saffron party majority in Lok Sabha, and none of other parties could open their account in the region.

Elaborate security arrangements have been made in all districts.

District Election Officer DK Singh said out of 887 polling centres in riot-scarred Muzaffarnagar, around 600 are critical where video cameras will be installed to maintain the strict vigil.

Around 6,000 paramilitary personnel are being deployed in all the 887 polling centres in Muzaffarnagar and neighbouring Shamli to instill a sense of fearlessness among voters, especially with focus on the areas which had witnessed communal riots in 2013.

Spearheading the BJP campaign, Modi had highlighted demonetisation as an "anti-graft" and "pro-poor" measure and promised to push his development agenda in the state.

Young guns Akhilesh Yadav and Rahul Gandhi, who have added a new dimension to the contest with the Samajwadi Party-Congress alliance, have claimed that the BJP will face the wrath of the common man who "suffered" due to the note ban. The first phase of voting in the Muslim-dominated region could throw light on the presence of All India Majlis-e-Ittehadul Muslimeen led by Asaduddin Owaisi.

The Muslim-dominated areas in the belt will be an acid test for BSP chief Mayawati, who is banking heavily on Dalit and Muslim votes. The region was once BSP's favourite hunting ground.

For all political parties, the stakes are high as the first phase is likely to set the tone for the elections in the remaining six phases.

Chief Election Commissioner Naseem Zaidi, who reviewed poll preparations, said those who had migrated from Kairana for any reason will be extended security if they take part in the polling process in their respective areas.

In the run up to the polls, some stray incidents of violence were reported with supporters of archrival the SP and the BSP clashing in Hathras district in which one person was killed and five others were injured.

In another incident, two bullet-riddled bodies, one identified as the brother of an RLD candidate, were found in a mango orchard near Khurja in Bulandshahr district.

In order to check distribution of liquor to voters during elections, the excise department has set up checkposts at the inter-state borders as well as along the border with Nepal.

Besides, the EC has set up a police cell to keep tab on messages received through WhatsApp and social media.

Development, clearance of cane dues and law and order situation are the other major issues in these constituencies and every political party has promised to address them if voted to power.

IMAGE: Women show their inked finger after voting in Baghpat, UP on Saturday. Photograph: ANI 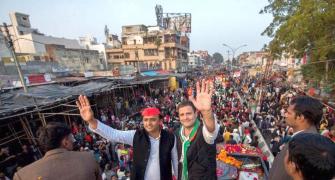 These UP seats to see SP-Congress contest, courtesy rebels 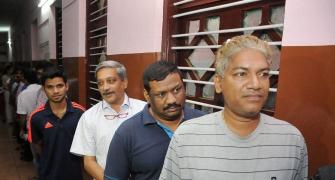 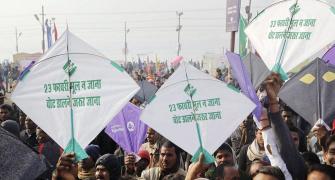 UP polls: Allies, mother-son fighting each other in Allahabad 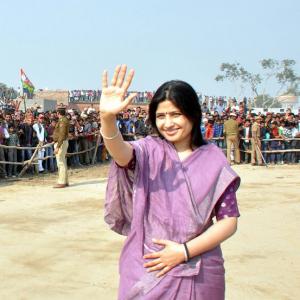 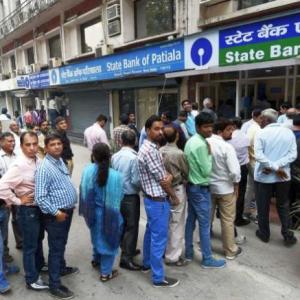