ULFA ban to stay despite hope of truce: Assam CM

Hours after the release of United Liberation Front of Asom Chairman Arabinda Rajkhowa from Guwhati's Central Jail, the Assam government clarified that the ban the outfit will stay despite the outfit's leadership talking truce.

Assam Chief Minister Tarun Gogoi said, "We have intelligence inputs that a section of the ULFA, who is opposing the ongoing peace process, is out to carry out violent strikes. Though we welcome those who have come forward for talks, operation will continue against those ULFA militants who indulge in violence."

The Assam CM pointed out that though Paresh Barua, the fugitive commander-in-chief of the ULFA, continued to demand for "sovereignty of Assam ". "Paresh Barua is asking for sovereignty, but

not all," Gogoi said indicating the Rajkhowa was not among those demanding sovereignty.

He asserted that the government wanted all the ULFA men including Barua to come forward for a dialogue in the greater interests of restoration peace in Assam.

ULFA cadres at large made an appeal to Rajhowa to be alert against the design of the 'enemy' (Government of India) and not to take any decision that would derail the revolution started by the outfit and belittle the sacrifice of thousands of 'ULFA martyrs'.

Gogoi said that the government does not have any objection against ULFA leaders who have been released on bail holding public meetings and using flags and banners of the banned outfit as long as they spoke about restoration of peace in Assam.
Anurag Kashyap in Guwahati
Related News: ULFA, Assam CM, Tarun Gogoi, Paresh Barua, Arabinda Rajkhowa
Print this article 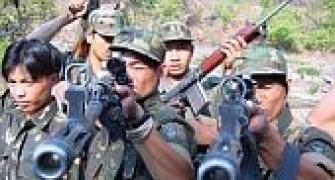