The protection gained after being fully vaccinated with both doses of the Pfizer/BioNTech and Oxford/AstraZeneca vaccines against Covid-19 wanes over time, a new UK study reported on Wednesday. The ZOE Covid Study, a not-for-profit app-based initiative that has been studying real-world data in the UK on the deadly virus since last year, found that protection after two shots of the Pfizer/BioNTech vaccine decreased from 88 per cent at one month to 74 per cent at five to six months.

With Oxford/AstraZeneca, being administered in India as Covishield, the fall was from 77 per cent to 67 per cent at four to five months.

The findings would seem to reaffirm the UK government's plan to offer booster shots to the most vulnerable groups, expected from next month.

"In my opinion, a reasonable worst-case scenario could see protection below 50 per cent for the elderly and healthcare workers by winter,” said Professor Tim Spector, lead scientist on the ZOE Covid Study.

However, he insisted that vaccines still provide strong protection against severe Covid-19, especially against the highly transmissible Delta variant first identified in India.

"Waning protection is to be expected and is not a reason to not get vaccinated. Vaccines still provide high levels of protection for the majority of the population, especially against the Delta variant, so we still need as many people as possible to get fully vaccinated," he said.

Professor Spector said that there is an urgency to make plans for ”vaccine boosters" and also decide if a strategy to vaccinate children would meet the ultimate aim of reducing deaths and hospital admissions.

The vast study involved more than 1.2 million test results and participants, though the vaccines were not trialled against the now dominant Delta variant of the virus.

Public Health England (PHE) estimates that around 84,600 deaths and 23 million infections have been prevented as a result of the Covid-19 vaccination programme in England so far.

Meanwhile, the department of health and social care (DHSC) confirmed a new clinical trial to determine whether a third so-called booster dose of vaccine will improve the immune response for people who have weakened immune systems is launching in the UK.

The study, OCTAVE DUO, will offer people who are immunosuppressed or immunocompromised a Pfizer, Moderna or Novavax vaccine to determine whether this will give a stronger immune response than just two doses of two-dose vaccines.

”Vaccines have built a strong wall of defence in the UK and this is allowing most of us to learn to live safely with COVID-19,” said UK Health Secretary Sajid Javid.

”We know some people may get less protection from the vaccine than others, so we are planning for a booster programme in the autumn, prioritising those most at risk. This new study will play an important role in helping to shape the deployment of future vaccine doses for these specific at-risk groups,” he said.

The OCTAVE trial published preliminary data this week showing that 89 per cent of people who are immunocompromised or immunosuppressed, with underlying health conditions, generate antibodies following vaccination, and 60 per cent generate a strong antibody response following two doses of a vaccine.

However, 40 per cent of people in these groups mounted a low, or undetectable, immune response after two doses, and the level of antibody response varies between the groups studied.

The level of antibodies required for protection from Covid-19 is still not known, and it is likely that T cells also play an important role in protecting people from the deadly virus.

Up to 1,200 patients who are already involved in the OCTAVE study or those with other at-risk conditions involved in parallel studies will be recruited to the new OCTAVE DUO trial, co-funded by the government's Vaccines Taskforce and UK Research and Innovation (UKRI) and led by the University of Glasgow and University of Birmingham. 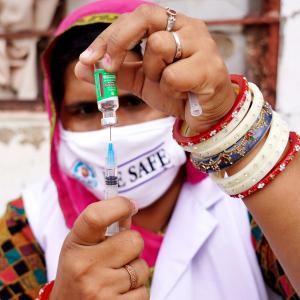