All the action from political crisis in Karnataka has now shifted to New Delhi, with both the camps -- led by former Chief Minister B S Yeddyurappa and current CM Sadananda Gowda, respectively -- in the Bharatiya Janata Party scheduled to meet with the top leadership in a bid to end the row.

While Yeddyurappa and his followers would meet party's top leaders at their residences in the national capital and put forth their demand seeking his reinstatement as CM, Gowda would meet these leaders separately and oppose such a move.

Yeddyurappa has raised his pitch and said he would want a decision latest by Friday and there was no question of waiting anymore.

He added that he should replace Sadananda Gowda. However, as a last measure he may settle for the candidature of Jagadish Shettar.

In the meanwhile, Yeddyurappa's case would be strongly opposed by both Gowda and Karnataka BJP chief K S Eshwarappa.

Both Gowda and Eshwarappa are currently in Delhi with a long list of complaints against Yeddyurappa. They feel the influential Lingayat leader has turned 'anti-party'.

Moreover, Yeddyurappa parked rebels in a resort on the outskirts of Bengaluru and also did not bother campaigning for the Udupi-Chickmagalur by-election, which the BJP eventually lost. They also say that he fielded a rebel candidate in B Puttaswamy in the Rajya Sabha when the party already had a candidate.

Interestingly, there is also a third group in New Delhi led by Balachandra Jharkiholli. This group of 15 MLAs has made it clear that if Gowda is changed, all 15 of them would resign immediately. 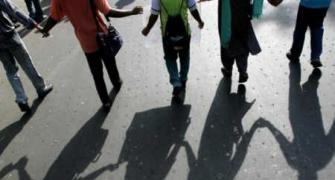 K'taka CM to travel to Delhi to thwart Yeddy's plan