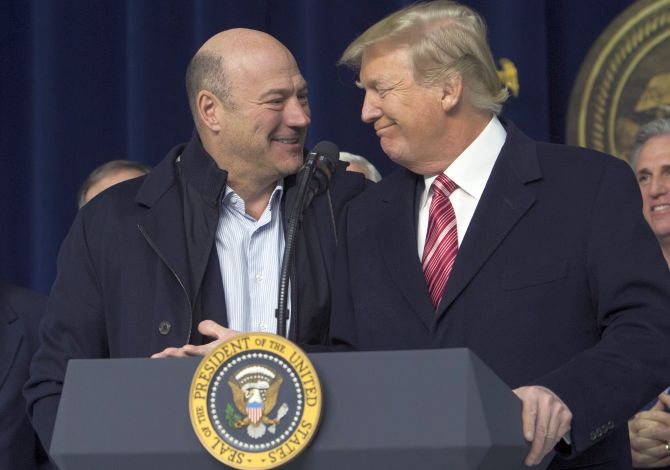 IMAGE: Gary Cohn, a Former Goldman Sach executive, resigned as the White House National Economic Council director, after differences with the decision of Trump to impose a 25 per cent tariff on import of steel and 10 per cent on aluminium. Photograph: Chris Kleponis-Pool/Getty Images

Cohn, 57, who is a Former Goldman Sach executive, resigned as the White House National Economic Council director, after differences with the decision of Trump to impose a 25 per cent tariff on import of steel and 10 per cent on aluminium.

The White House did not give the reason for his resignation. For several weeks, Cohen had been discussing with the US president that it was nearing time for him to transition out. His departure date is to be determined but will be a few weeks from now, a White House official said.

No chaos in White House: Trump

There is no chaos in the White House and it is full of energy, US President Donald Trump said.

Trump’s comments came after reports that there is chaos in the White House and a lot of people are planning to leave his administration.

“I read where, oh, gee, maybe people don’t want to work for Trump -- and, believe me, everybody wants to work in the White House. They all want a piece of that Oval Office. They want a piece of the West Wing. And not only in terms of it looks great on their resume, it’s just a great place to work. It’s got tremendous energy. It’s tough,” he said.

“Gary has been my chief economic advisor and did a superb job in driving our agenda, helping to deliver historic tax cuts and reforms and unleashing the American economy once again. He is a rare talent, and I thank him for his dedicated service to the American people,” Trump said in a statement issued by the White House.

Cohn served as Trump’s chief economic advisor since the beginning of the Administration. During his stay at the White House, he led coordination of Trump’s pro-growth domestic and global economic policy agenda, including the passage of historic tax cuts and reforms in December 2017, the official said.

Cohen played a critical role in advancing the president’s deregulatory agenda and organising his successful participation in the World Economic Forum in January 2018, a White House official said.

“It has been an honour to serve my country and enact pro-growth economic policies to benefit the American people, in particular the passage of historic tax reform. I am grateful to the President for giving me this opportunity and wish him and the Administration great success in the future,” Cohen said in a statement.

White House Chief of Staff John Kelly said Cohen served his country with great distinction, dedicating his skill and leadership to grow the US economy and pass historic tax reform.

“I will miss having him as a partner in the White House, but he departs having made a real impact in the lives of the American people,” he said.

Notable departures from the Trump administration