Tripura govt relents to mass protests against renaming of palace 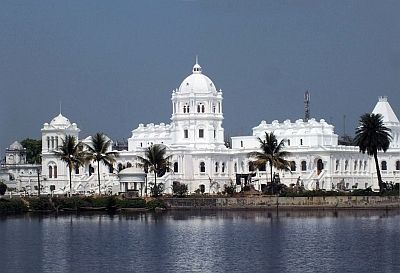 In a row over the re-naming of Ujjayanta Palace, the home of erstwhile Royal family of Tripura, the Left Front government has apparently given in to the massive public protests orchestrated by Tripura Students’ Federation.

The government has also agreed to install a statue of the builder of the palace Radha Kishore Manikya very soon. A massive rally of at least 8,000 people, mostly youths, held the biggest ever candle-light rally of Agartala on Sunday evening demanding immediate stoppage of renaming Ujjayanta Palace as the Tripura State Museum.

The rally was organised by the Twipra Students Joint Federation and Joint Action Committee constituted by a number of non-governmental organisation including the Indigenous Youth Federation of Tripura, the Royal Tripura Foundation and others.

The protests want it the museum to be named as UjjayantaMuseum. The UjjayantaPalace used to house the state legislative assembly until 2012. The new state museum in the palace is scheduled to be inaugurated by Vice President Hamid Ansari on September 25.

The UjjayantaPalace served as the Tripura state legislative assembly till 2011. The palace was built during the regime of Maharaja Radha Kishore Manikya during 1899-1901.

The royal family is reported to have spent Rs 10 lakh despite financial constraints at the time. The earlier royal palace of the Tirpura monarchs was located 10 kilometres away from Agartala.

The palace is operational since 1901.

“The palace was recently declared as a heritage building by the state government which brings it under the jurisdiction of Heritage Buildings Act. Subsequently, such a name-change which is feared to obliterate the entire legacy of the palace and the glorious past attached with it becomes illegal. The palace is the heritage of Tripura and not just a medium of recollection of the monarchal regime,” the TSF stated.

Pradyut Bikram Kishore Debbarma, the titular king of Tripura said, “The palace is a historical spot. It doesn’t belong to the members of erstwhile royal family alone, neither does it solely belongs to the government. It belongs to Tripura and somebody in the government can’t suddenly impose a decision to change its name. I demand that the proposed name of the museum be amended to TripuraUjjayantaStateMuseum or anything which has got Ujjayanta in it. Having a name is not what I am speaking for. Ujjayanta is a remembrance of the rich past that we had.”

“I request you to urgently intervene in the issue and ensure that the sign-board be changed either to the Ujjayanta GovernmentMuseum or the UjjayantaStateMuseum,” Roy Barman wrote in his letter to the chief minister.