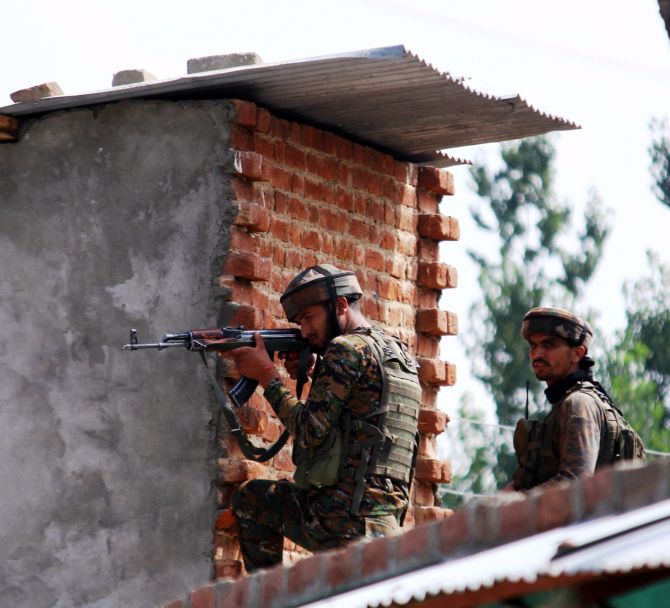 Top Lashkar-e-Tayiba terrorist Abu Dujana, a Pakistani national wanted in connection with several terror attacks, and his aide were gunned down on Tuesday by the security forces in an encounter in the Pulwama district of Jammu and Kashmir.

And what helped security forces to zero-in on this much wanted terrorist were Dujana's frequent visit to a particular village where he was believed to have married a girl, an official claimed on the condition of anonymity.

The two terrorists were gunned down in the encounter, however, some people gathered at the spot and pelted stones and the security forces used tear smoke shells, pellets and fired a few rounds to disperse them. According to a police official one civilian died in the cross-firing.

Early Tuesday, the security forces launched a cordon and search operation in the Hakripora area of Pulwama following information that Dujana and his local associate, Arif Nabi Dar, were present, an army official said.

An encounter broke out after the holed-up terrorists refused to surrender, he said.

During the firefight, both terrorists were killed, the official said. Their bodies were recovered and the operation called off, he added.

Pakistani national Dujana was wanted for many attacks on security forces and political workers in south Kashmir. He was variously described as a category 'A' or 'A++' terrorist by army and police officials. Dujana carried a reward of Rs 10 lakh on his head, they said.

According to a police spokesman, the slain terrorists were involved in grenade attacks on security forces at Kakapora.

They were also involved in the killing of sarpanch Fayaz Ahmad Bhat earlier this year, he said.

Dujana was a very close associate of Abdul Rehman alias Abu Qasim, the spokesman said adding that both were involved in an attack on a Border Security Force convoy in Udhampur last year.

He was also involved in the killing of two Central Reserve Police Force personnel at Sangam in Anantnag district and in an attack on a police party at Gallander in Pampore area in which two constables were killed, the spokesman claimed.

As the security forces were engaged in the counter-terrorism operation, over 100 protesters resorted to stone pelting on them, a police official said.

The security forces used tear smoke shells, pellets and fired a few rounds to disperse them, which resulted in the death of one civilian and injuries to a dozen others, he said.

"One person with fire-arm injuries was brought dead at the Pulwama district hospital," the police official said.

The deceased was identified as Firdous Ahmad, a resident of Begumbagh in Kakapora area.

According to the police spokesman, he was hit during cross firing between the terrorists and the security forces.

Meanwhile, mobile internet services were snapped across Kashmir as a precautionary measure to maintain law and order. The speed of broadband internet services in the valley also significantly reduced, locals said.

The authorities shutdown schools, colleges and universities soon after the killing of two terrorists as a precautionary measure, officials said.

"Announcements were made from mosques and we tried to utilise the services of the house owner and the persons who came out of the house to impress upon them to surrender. But, because of Dujana's presence, the other fellow could also not surrender," Khan said.

Terming Dujana's killing as "good riddance", IGP Khan claimed he had become an eye-sore for everybody.

"He used to enter any house and do anything he wanted to do. Good riddance that way. I think people should relax, the girls, our sisters, they should relax now that no such person is there to harass them," Khan said. 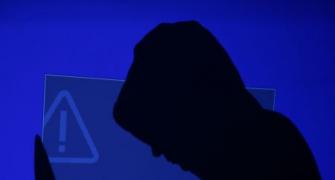 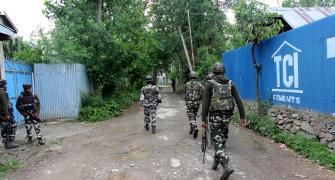