A girl who appeared for NEET and aspired to pursue medical education died by suicide at a village in Ariyalur District, the second such death within two days in Tamil Nadu, with the incident seeing a repeat of the main opposition AIADMK hitting out at the DMK regime, while chief minister M K Stalin on Tuesday vowed to continue the legal fight to remove the test.

Hours after her death, the chief minister assured students and parents that there would be no compromise in the legal struggle to fully remove NEET. 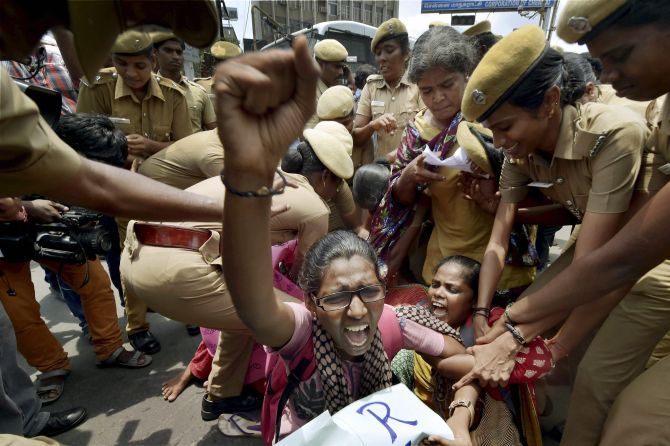 Pointing to the passage of a Bill in the Assembly on September 13, Stalin said, "right from the beginning, we are opposing NEET, which is shattering the dreams of Tamil Nadu students to pursue medical education. We have started a legal struggle in full swing with the passing of the Bill, supported by all parties, barring the BJP."

He said there would be no compromise till NEET is removed by getting the assent of President Ram Nath Kovind to the Bill, which provides for admission to medical courses based on the Class XII marks.

The chief minister said that a slew of incidents, including impersonation, sale of question papers and dishonest practices in coaching centres continued to expose that NEET is not a test to judge eligibility.

"Our government is continuing to take all steps to remove NEET, which is ruining equality in education," he said.

Expressing anguish and sorrow over the death of the girl, Stalin appealed to students and the parents, saying "there must be an end to suicides."

He requested parents to nurture confidence among their children and added "let us stop the tragedy of ending one life's for the sake of life saving medical education. Let us drive out NEET through legal struggle."

The chief minister conveyed his condolences and sympathies to the bereaved family.

While the main opposition AIADMK demanded that the ruling DMK stop its "political drama" over NEET, the ruling party targeted the Centre again, saying that the national test was a "conspiracy" and asserted that suicide is not a solution for it.

The 17-year old girl, Kanimozhi, took the extreme step when her parents were away on September 13 night and they found her hanging on returning home within a span of a few hours, police said.

Daughter of a lawyer, Kanimozhi, hailing from a village near Jayankondam in Ariyalur District, is the 16th medical aspirant from Tamil Nadu to end her life, fearing outcome of the test.

Dhanush, a 19-year old boy, died by suicide on September 12, hours before he was to take the test.

Kanimozhi appeared for the national test on Sunday and had told her parents that some questions were tough and that she was concerned about the outcome, a police officer said, adding "investigation is still on."

Another official told PTI that police received information early today and the body was sent for post-mortem to a government hospital and later handed over to the family.

"The sale of question paper for Rs 35 lakh is the fresh example of NEET being only a thing of betrayal and conspiracy. Suicide is not the solution for the Union's NEET conspiracy," Udhayanidhi, who is also an MLA from a Chennai constituency, tweeted.

AIADMK top leader K Palaniswami, expressing shock and grief over Kanimozhi's death by suicide, appealed to the student community not to take such extreme steps and emphasised that "life is for living" and there are a whole lot of courses open to them and medical education alone is not life.

Condoling her death, he said "let Kanimozhi's death be the final loss of life over NEET."

Palaniswami, who is the Leader of the Opposition, said the DMK should stop its "political drama" and give up being a "spectator" of suicide by students due to the fear of NEET.

Considering the welfare of students, the ruling party should come forward to explain to the people and students the "true status," he said, apparently hinting at aspects like the possibility of getting exemption for Tamil Nadu from NEET.

In a statement, Palaniswami said the government should offer counselling for aspirants who have appeared for NEET through a panel, comprising experts, including psychologists and educationists.

Such experts should instill courage and confidence in students and also explain to them about several other paramedical courses available and its utility in case they failed to get through the NEET.

Parents should monitor their children and render proper advise, he said.

AIADMK coordinator and former chief minister O Panneerselvam appealed to the students not to take such extreme steps and conveyed his condolences to the bereaved family.

MDMK chief Vaiko urged the BJP-led Centre to give assent to the TN Bill to exempt NEET and said the spate of suicides over NEET in the state must come to an end. He requested the students who have appeared for NEET to face life with courage.

PMK leader and Rajya Sabha MP Anbumani Ramadoss said Kanimozhi, who had secured 562.5 out of 600 in her Class XII exams, had high chances of getting admitted to the MBBS had there been no NEET.

The fear that she may not secure enough marks in NEET and that admission would be based only on the test score drove her to end her life, he said in a statement.

"At the same time, the student community should be prepared to fight any situation. No one should end their lives," he said and pointed out that there are several other courses to pursue.

He urged the Tamil Nadu government to get the approval of the President to the Bill to exempt NEET for the state and announce that "there will be no more NEET in Tamil Nadu."

Note: Lead image of TN students protesting against death by suicide of a 17-year-old who had moved the SC against NEET in 2017 is used for representational purpose. 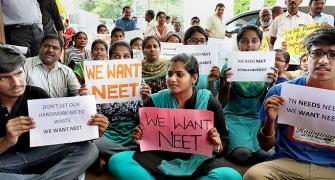 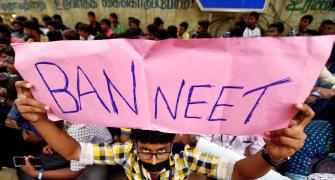 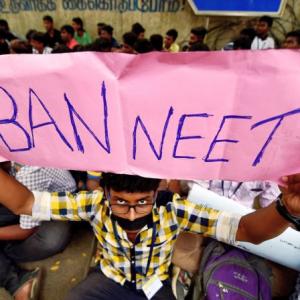