People have given me rest, says a vanquished Karunanidhi

Source: PTI
May 13, 2011 19:03 IST
Handed down one of the worst poll debacles, Dravida Munnetra Kazhagam president and Tamil Nadu Chief Minister M Karunanidhi on Friday said the people of the state had given him "proper rest," indicating the burden of office was removed from his ageing shoulders.

"People have given me proper rest," the 87-year-old leader said in his first reaction to the DMK's dismal show in recent years.

Karunanidhi's typical cryptic remarks came as no surprise in political circles as succession wars have come to haunt the DMK's first family for the past few years, with both his sons, M K Alagiri and M K Stalin, staking claim to be his political heir.

A writer, Karunanidhi had expressed willingness to quit active politics and dedicate more time to his favourite pastime but had refrained from speaking about it in recent months.

Karunanidhi, who won with a huge margin of over 50,000 votes from Tiruvarur, said he congratulated the people of the state (on the outcome).

Karunanidhi, one of the founders of the DMK, a splinter group of parent organisation of EVR Periyar-founded Dravidar Kazhagam, first represented Kulithalai constituency in 1956.

Since then, the octogenarian leader has had an unbeaten record and has now won for a record 12th time though his aspirations of being at the helm for a record sixth time remains unfulfilled. 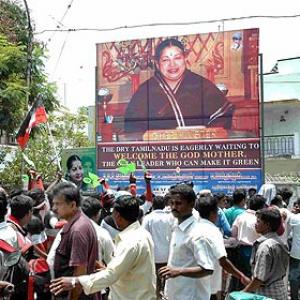