A suspected terrorist was killed and a woman blew herself up during a massive operation undertaken by French authorities on Wednesday targeting the possible mastermind of France's worst-ever terror attacks. 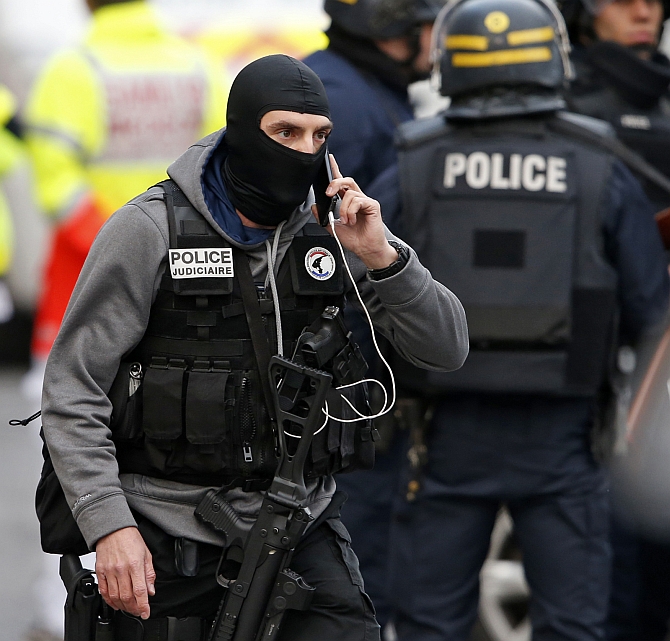 A member of the French judicial police unit speaks on the phone at the raid scene in Saint-Denis, near Paris. Photograph: Benoit Tessier/Reuters

Gunfire and explosions rocked the Saint-Denis area in the north of the city, near the Stade de France stadium, from before dawn as terrified residents were evacuated or told to stay in their homes.

Authorities arrested seven people and five police officers suffered minor injuries in the operation -- a seven-hour stand-off between security forces and a group of people holed up in an apartment.

Phone surveillance and testimony led authorities to believe that Abdelhamid Abaaoud, the suspected ringleader of last week's bloody Paris attacks, may have been in an apartment in the northern Paris suburb of Saint-Denis, according to Paris prosecutor Francois Molins. 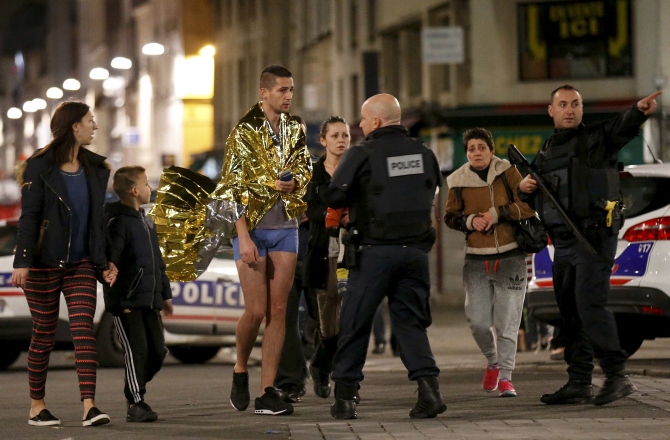 Officials didn't say immediately if Abaaoud, a Belgian ISIS member widely believed to have been in Syria recently, was among the dead or detained. Still, they lauded the efforts of the heavily armed police involved in the operation that ended, after several tense hours, shortly before noon Wednesday.

Heavily armed police were seen hauling away a naked man from the building at the centre of the raid.

Residents of the Paris suburb, some of whom were evacuated in their underwear, said they had been caught in a terrifying exchange of fire. 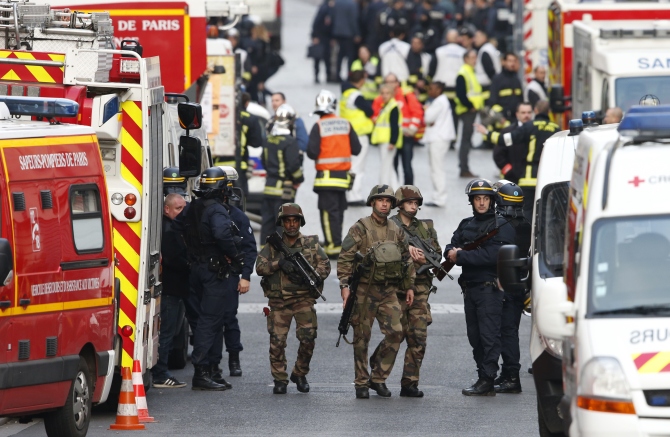 Hayat, 26, had been leaving a friend's apartment where she had spent the night when the shots erupted.

"I heard gunfire," she said. "I could have been hit by a bullet. I never thought terrorists could have hidden here."

Some 110 police swarmed on the diverse, working-class area that is home to the Stade de France sports stadium -- where three suicide bombings took place days earlier. They first went into one apartment that had been under surveillance since Tuesday, a Paris police source said. That raid led them to another apartment on the same street.

The security action occurred "right on time," police sources told CNN, as the targeted suspects were "about to move on some kind of operation." Police also detained a man who said the suspects were staying in his flat.

"I found out that it's at my house, and that the people are holed up at my flat. I didn't know they were terrorists," Jawad Ben Dow told the Reuters news agency.

"Someone asked me to put two people up for three days and I did them a favour, it's normal. I don't know where they came from I don't know anything. If I'd known do you think I'd have done it?" he said.

Seven jihadists were killed or blew themselves up in the attacks on the stadium, a concert hall, bars and restaurants that were claimed by the Islamic State group operating in Iraq and Syria. 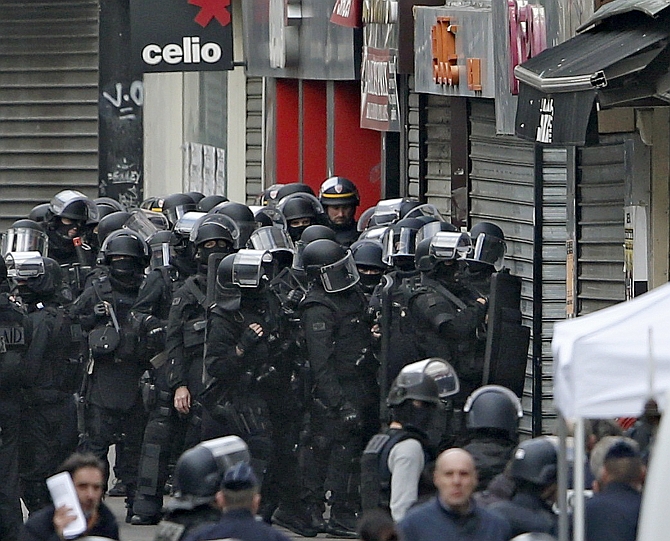 Another witness, Amine Guizani, said he heard the sound of grenades and automatic gunfire. 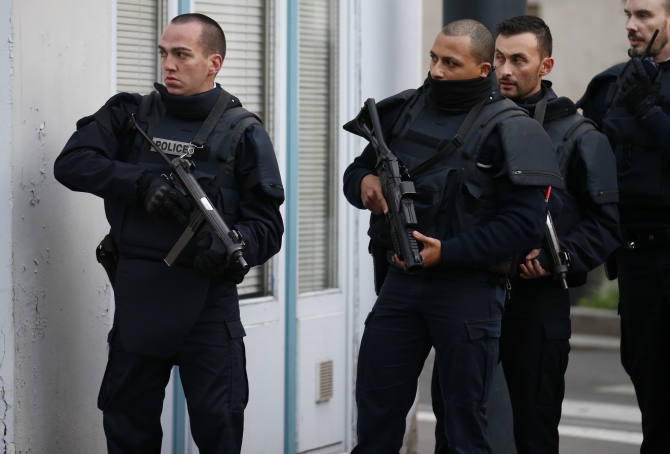 Investigators have identified 27-year-old Abaaoud, a Belgian of Moroccan descent, as the chief architect of Friday's attacks in Paris, which killed 129 people and injured 350 others.

A US official briefed on intelligence matters said Abaaoud was a key figure in an Islamic State external operations cell that US intelligence agencies have been tracking for many months.

All of those killed in the attack have now been identified, a statement from the French cabinet said. 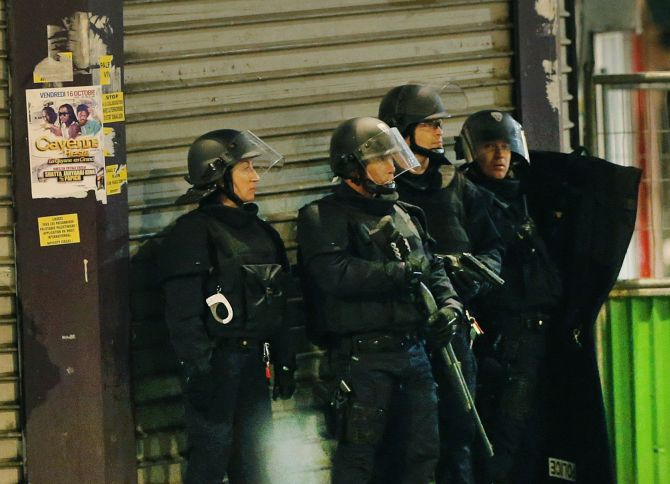 French special police forces secure the area as shots are exchanged in Saint-Denis, France, near Paris, during an operation to catch fugitives from Friday night's deadly attacks in the French capital. Photograph: Reuters/Christian Hartmann

Police are hunting for two other individuals, including 26-year-old Salah Abdeslam, suspected of taking part in the attacks with his suicide-bomber brother Brahim.

Congratulating the French forces that carried out the operation, but reiterating that his country's fight against terrorists, specifically those linked to ISIS, is anything but over, Hollande said: "It was aimed at neutralising the terrorists based in Saint-Denis who are linked to the authors of the attacks and awful crimes of Friday night." 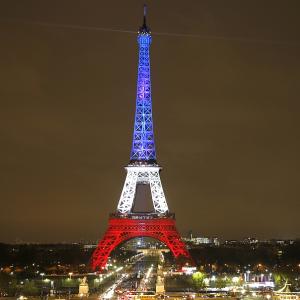