One person was killed, four were injured seriously, and nine sustained minor injuries in a collision between a local train and Vidarbha Express near Khardi station near Nashik on Mumbai-Kasara route on Thursday night.

The mishap took place after 11 bogeys of an EMU train from Kasara going to Kalyan derailed possibly due to landslide, Railway Board Chairman Vinay Mittal said in New Delhi.

The derailed EMU coaches blocked the adjacent track on which the Vidarbha Express, going from Mumbai to Gondia, came from the opposite direction and collided with EMU bogeys at around 2130 hours, he said.

The driver of the Vidarbha Express noticed the obstructions on the track and applied emergency brake and as a result two of its coaches S9 and S10 jumped off the line, causing the collision with the derailed coaches, he said.

Mittal said the Commissioner of Safety (Railways) would conduct an inquiry into the incident.

Railway Minister Mukul Roy announced an exgratia of Rs 5 lakh for next of the kin of the dead, Rs 1 lakh for seriously injured and Rs 25,000 for those who suffered simple injuries.

A statement from Central Railway said the mishap took place between Kasara and Umbermali on Kalyan Igatpuri section of Mumbai division.

Helpline Number 022-22694040 (Mumbai), 10720 (Nagpur) has been provided for those seeking the information about the mishap, the statement added. 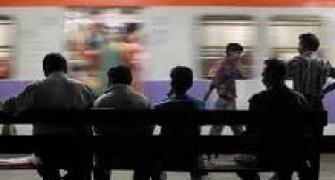