News
Business
Movies
Sports
Cricket
Get Ahead
Money Tips
Shopping
Sign in  |  Create a Rediffmail account
Rediff.com  » News » Rahman has no problem with Vande Mataram, but this MP does

Rahman has no problem with Vande Mataram, but this MP does 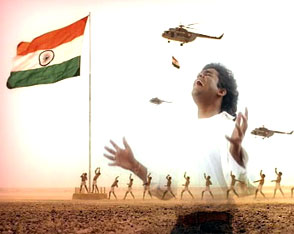 'This is not the first time I have refused to stand for this particular song and this will not be the last time,' Lok Sabha MP Shafiqur Rahman Barq tells Rediff.com's A Ganesh Nadar.

'I have no problems with Jana Gana Mana.'

Until a couple of days ago, Shafiqur Rahman Barq, the Bahujan Samaj Party's Lok Sabha MP from Sambhal in Uttar Pradesh, was little known nationally, even though he has been elected to the House of the People four times.

Then the 82-year-old Barq, below, walked out of the Lok Sabha as Vande Mataram was playing, provoking a sharp rebuke from Speaker Meira Kumar and comparisions to the Taliban and worse from the Bharatiya Janata Party.

Now that the Budget session of Parliament has been adjourned sine die, Barq has returned to his Lok Sabha constituency and does not appear perturbed by the uproar.

When this correspondent asked Barq for his reaction to the controversy, he said, "We Muslims bow and pray only to Allah. We do not bow down or pray or respect or revere any other God or any other being whatever you may call it."

"Have you heard Vande Mataram? It talks about bowing, revering, praying to the Motherland. I am not going to do that. It goes against the very grain of Islam," the MP added. "Do you know how many ulema have come out in support of me today?" Barq asked. "I have been receiving calls all morning assuring me of their support. Secularists have called and said they are with me. This is a secular country."

"This is not the first time I have refused to stand for this particular song and this will not be the last time," Barq insisted. "I have no problems with Jana Gana Mana."

"Yes, I know there were other Muslim MPs who stood there, and I know there are Muslims who sing Vande Mataram. That is their outlook. I am not joining issue with them, but I am not going to follow them."

Then the MP added, "And please write my full name, Shafiqur Rahman Barq. Don't leave out the Barq." 'No wrong in Vande Mataram if it doesn't amount to worship'