There are 'no good or bad terrorists': Prez tells Xi 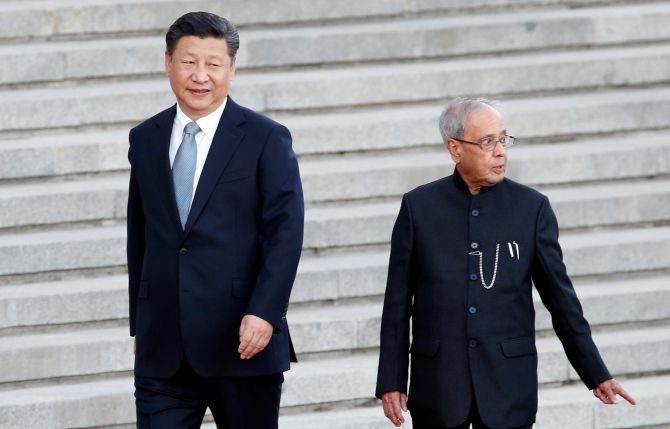 IMAGE: President Pranab Mukherjee with his Chinese counterpart Xi Jinping attend a welcoming ceremony at the Great Hall of the People in Beijing, China, on Thursday. Photograph: Kim Kyung-Hoon/ Reuters

India on Thursday sought China’s cooperation in international fora like the United Nations in the fight against terrorism making it clear that there was ‘no good or bad terrorists’ and told Beijing that it should play a positive role in ensuring a predictable nuclear regime as New Delhi seeks to join the elite Nuclear Suppliers Group.

The two issues came up during President Pranab Mukherjee’s talks with his Chinese counterpart Xi Jinping and Premier Li Keqiang at the Great Hall of the People on the penultimate day of his four-day maiden state visit to China.

Largely, there was appreciation of the President’s visit by the Chinese leadership and all the three leaders acknowledged his positive role in building the bilateral relationship during his long political career in different capacities. However, there was acknowledgment of differences.

Briefing the media on the 80-minute talks Mukherjee held at delegation level with Xi, Foreign Secretary S Jaishankar said they were frank and both sides acknowledged the need to respect each other’s sensitivities and concerns.

The President raising the issues of cooperation in combating terrorism and the need for a predictable nuclear regime assumes significance in the context of China’s action in blocking the United Nations’ move to blacklist Jaish-e-Mohammad chief Masood Azhar as a global terrorist and the bid to block India's admission to the NSG on the ground it has not signed the Non-Proliferation Treaty.

Essentially, what was conveyed to China during the discussions was that it was a global fight against terrorism and India and China are affected by it.

“There are strong sentiments on the issue in India because many lives have been lost. For the elimination of international and cross-border terrorirsm there is no such thing as good terrorists or bad terrorists. They don’t have any ideology.

Asked whether the JeM issue was specifically raised, he said, “The President specifically referred to the menace of transborder terrorism. There was no good or bad terrorism and they should take into account each other's sensitivities. We have spoken on cross border terrorism and zero tolerance on terrorism. No good or bad terrorists and they should cooperate closely in the UN on this issue.”

While flagging the need for India's attempts to bridge the growing energy deficit without compromising on climate change, Mukherjee asked Xi to give personal attention to this matter.

Interestingly, in the Chinese briefing to the media after talks between Mukherjee and Xi, officials said though there was no direct discussion about India's access to NSG, the two leaders mentioned the peaceful uses of nuclear energy and agreed to strengthen cooperation and exchanges in this regard.

About terrorism, they said the two leaders discussed the counter-terrorism cooperation agreed to work under the framework of global institutions like the UN and BRICS.

On the civil nuclear programme, the broad approach Mukherjee took was that like many other countries India suffered from acute shortage of power with over 300 million people having no access to energy. At the same time, it was conscious of the responsibility of the need to balance requirement with responsibilities on climate change.

“We need to have a predictable environment. We work closely very with China on climate change and we are reasonably confident that in our move in the quest for civil nuclear power China will play a positive role,” he said.

On the vexed border issue, both sides acknowledged the fact that differences should not come in the way of improving ties in other areas. The main intention was to maintain peace and tranquility while addressing the boundary question.

Besides, Xi and Li, the President also met the Chairman of the National People’s Congress Zhang Dejiang.

Mukherjee told the Chinese leadership that there was a multi-party consensus on improving ties with China. The fact that he was accompanied by a delegation of MPs from different parties was a demonstration of this fact.

He also spoke about the global uncertainty now because of the economy and how India and China could play a role in international fora.

The message of heightened responsibility was something that came through very clearly. There was a fair amount of discussion on economic issues with the President highlighting India’s trade deficit with China.

Trade deficit between India and China has risen to $44.7 billion during April-January period of 2015-16.

Mukherjee extended an invitation to Xi to visit India which he accepted.