‘The signals were clear. December 6 would not witness another show of “Hindu” strength staged periodically in Ayodhya. Something grave was afoot.’

Radhika Ramaseshan’s personal recollection of the events of December 6, 1992. 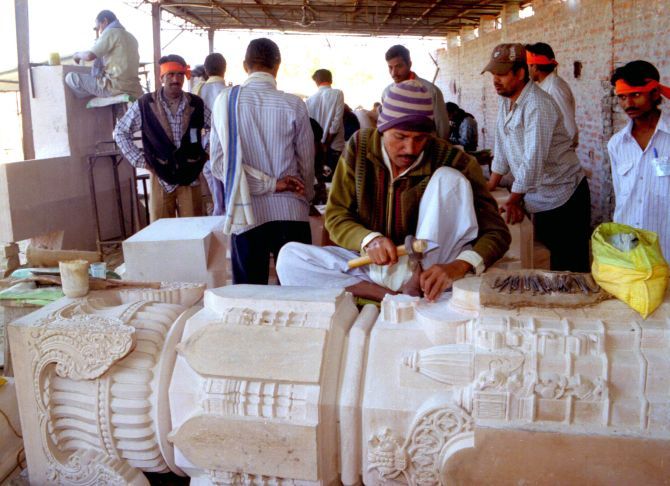 Image: Temple work in progress at Karsewakpuram, the biggest replica of the proposed Ram temple at the Ayodhya site. Photograph: Sondeep Shankar/Getty Images.

Thank the trustees of Ayodhya’s Hanuman Garhi temple for allowing journalists, albeit after a thorough scrutiny, to their spacious terrace from where we got a vantage view of every event leading to the denouement on December 6, 1992.

Uttar Pradesh had a BJP government and the security ecosystem was not as impregnable as the apparatuses that were put in place by the previous chief minister, Mulayam Singh Yadav, in October-November 1990 before the first concerted attack on the Babri mosque happened.

Even that cast-iron cover was breached by the determined volunteers or kar sevaks of the RSS family, forcing the state police to open fire and kill some of them.

Curfew and police weren’t required two years later. The atmosphere crackled with so much tension that we spoke little but exchanged nervous glances as the kar sevaks milled around, saffron bandanas emblazoned with ‘Jai Shri Ram’ wrapped around their necks and heads.

Those from Faizabad-Ayodhya recognised the journalists from Lucknow frequenting the pilgrim town and darted hostile looks on those they perhaps slotted as ideological foes.

Names became important. I remember a couple of Muslim colleagues had quickly identified themselves as Hindus, even as the others prayed they wouldn’t be asked to display their identity cards.

I was camping in Faizabad for days and visited the Babri-Ramjanambhoomi complex every day to suss out the mood on the ground.

Every square inch of vacant land was occupied by the kar sevaks. They were disciplined and kept the precincts spotlessly clean. They were scary. In twos and threes, they went to the Muslim homes near the “disputed” site and met the residents.

A couple of houses were burnt down and a few mausoleums were desecrated. The Muslims vacated their homes soon thereafter. The signals were clear. December 6 would not witness another show of “Hindu” strength staged periodically in Ayodhya. Something grave was afoot.

The masterminds and their executors lost no time in carrying out the demolition. The complex was cleared of the journalists and hangers-on who went inside the structure. After a symbolic prayer by the leaders of the RSS, the Vishwa Hindu Parishad and the BJP, the assault began. A kar sevak climbed atop one of the three domes, shouted “Jai Shri Ram” and the rest clambered on.

Although the inside was not visible from where I watched, it was obviously packed with an equal number or more kar sevaks to rip apart the solid insides, in conjunction with those working on the exteriors. The demolition of the first dome ended with an exhortation to tear asunder the middle and the widest one.

The state and paramilitary forces watched motionless. The Parivar elders, like Ashok Singhal and L K Advani, attempted to rein in the “volunteers”. But the appeal was perfunctory.

After the middle dome collapsed in a mountain of debris, it was time to distribute sweets. Sugar because the mithai shops were shut. The kar sevaks pointedly offered them to the journalists, ostensibly to do a quick check on who would accept and who not. Nobody dared reject at peril of being assaulted.

The assault on journalists started before the last dome fell. A spunky girl from Faizabad, known as a free thinker, was dumped inside a pit.

Uma Bharti’s dulcet voice acquired a menacing edge as she egged on the kar sevaks with her “Ek dhakka aur do, Babri masjid ko tod do (Give one more push, demolish the Babri mosque)”, not that prodding was needed. By late evening, the place was a wreck.

The voyeurs for whom December 6 was a spectacle collected “memorabilia” from the detritus. For the others, the day signified a fundamental and profound shift in India’s polity.

Radhika Ramaseshan was with The Pioneer and based in Lucknow during the course of this event. 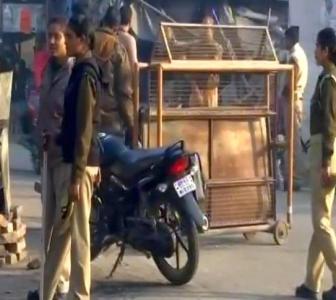 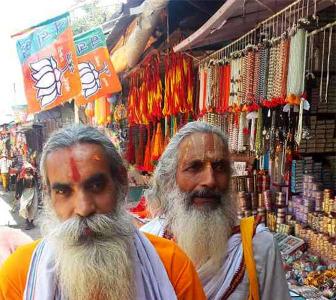 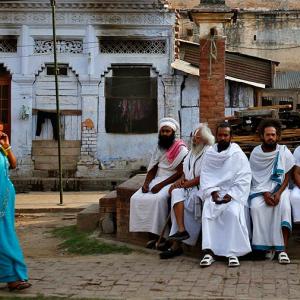 'Ayodhya's locals have moved on with their lives'