Pravin Gaikwad, the state coordinator of Maratha Kranti Morcha, has two rare qualities: he has an unparalleled connect with people from his community and, at the same time, underpins his ideology on a strong analytical base, reports Abhishek Waghmare. 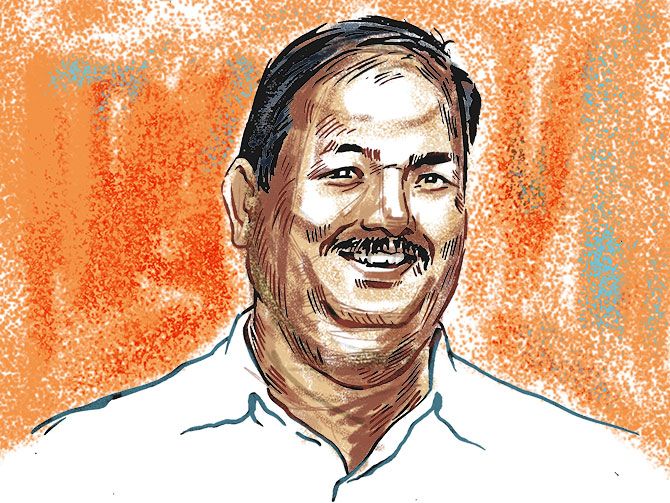 Periods of heightened political polarisation and caste-based social movements in India have two outcomes, say political analysts: regime change and/or the emergence of new political leaders. The simmering Maratha agitation in Maharashtra has not resulted in the first, but Pravin Gaikwad is undoubtedly a leader to watch as the country heads towards general elections.

Gaikwad, 48, has risen from being a member of the Maratha Mahasangh, an organisation that champions the cause of the disaffected Maratha community, to running not one, but multiple community organisations in the state. So it is no surprise that he is at the centre of the socio-political storm brewing in Maharashtra.

Earlier, he led the agitation -- Maratha Kranti ‘Thok’ Morcha (Maratha Revolution ‘Aggressive’ Rally) -- in the financial capital of Mumbai. If he was seeking public attention to his cause, he certainly got it as thousands of supporters of the movement blocked traffic and burned buses in the metropolis.

Ever sensitive to religious sentiments, however, he demanded an apology from Chief Minister Devendra Fadnavis for alleging earlier that the agitation could derail the annual pilgrimage to Pandharpur. Threatened by Gaikwad’s supporters, Fadnavis decided to skip his trip to the resting place of Lord Vitthal -- who is held in wide regard by the Marathi populace, especially the farming community -- on the final day of the pilgrimage.

The last two decades have spawned myriad community organisations in the state to represent the interests of the Marathas, who account for about a third of the population in the state. Some of them are decidedly action-oriented in extreme ways. Gaikwad joined the Maratha Mahasangh a couple of years after the Bhandarkar Oriental Research Institute in Pune was ransacked by the Sambhaji Brigade -- offspring of yet another parent organisation, the Maratha Seva Sangh -- in 2005.

Thereafter, his colleagues say, he has taken on the responsibility for channelling the energies of all the Maratha representative organisations, offering a modicum of coherence and focus and bringing the bahujan -- the scheduled castes, tribes and the other backward classes -- under the fold of the progressive movement. 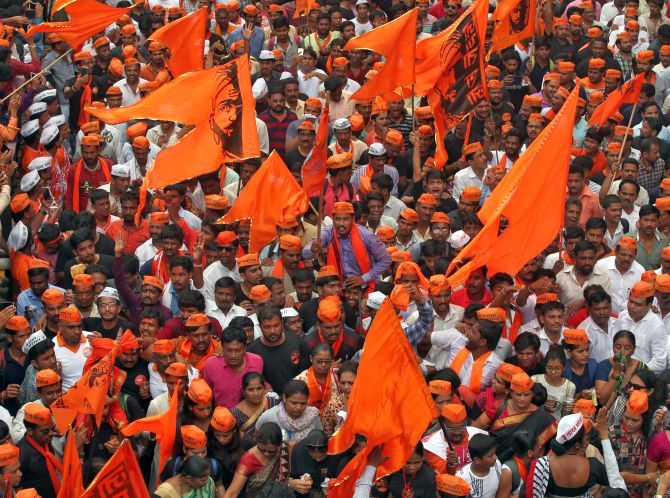 IMAGE: Maratha supporters come out in large numbers during the protest in Mumbai. Photograph: Shailesh Andrade/Reuters

Caste-based movements have been in vogue for the past couple of years: the Marathas in Maharashtra, Jats in Haryana and Patels in Gujarat have used the caste card to lobby for high quality and dignified jobs for youngsters of these former dominant-caste farming communities. But Maratha Mahasangh members aver that their agitation differs from the other two because it is: (a) non-violent (though this was scarcely the case); and (b) rural in its roots. The reason for this, they say, is Gaikwad.

Indeed, Gaikwad consciously positions himself as the face of the “progressive” brand of Maratha politics in line with social observers such as writer A H Salunkhe, as against the “Hindutva” brand professed by the likes of B M Purandare, and Manohar Bhide. Brahminism and capitalism are the forces that exploit the masses, and the progressive force of farmers and workers (dominated by the Maratha community) is the only way to counter the exploitation, he says.

A young activist who did not wish to be named said Gaikwad has two rare qualities; he has an unparalleled connect with people from his community and, at the same time, underpins his ideology on a strong analytical base. His case for Maratha reservation is based on hard numbers, not emotion, his supporters say.

On the political front, his views reflect those of the Maratha supremo and founder-president of the Nationalist Congress Party Sharad Pawar. But the community lost confidence in the Congress-NCP alliance because, despite having a majority of Maratha leaders, the combine didn’t do much in terms of job reservations for Marathas. Gaikwad, therefore, offers Marathas a renewed voice.

Gaikwad’s organisation regards the current regime led by the Bharatiya Janata Party as ideologically incompatible with its cause. This is significant. A slew of Maratha leaders from the combine joined the BJP, riding the Modi wave. Among them was Sambhaji Chhatrapati, NCP leader and a descendant of Shivaji, who worked shoulder to shoulder with Gaikwad in organising rallies and exhibitions not just in Maharashtra but in major state capitals too. In 2016, Chhatrapati accepted a Rajya Sabha nomination with BJP support.

Gaikwad, however, has remained apolitical and grounded in community work, say his followers, and has amply filled the gap left by other Maratha political leaders.

In other words, don’t be surprised if we see new faces in Maharashtra’s legislative assembly in 2019. 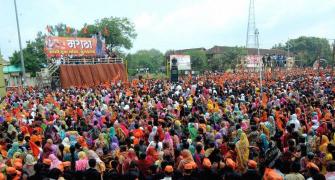 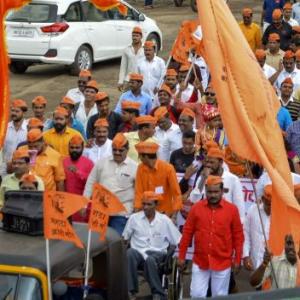 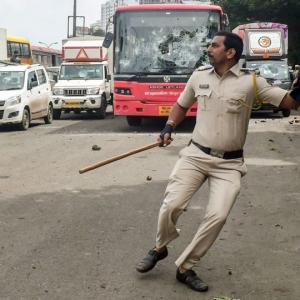