Terrorist killed in encounter in Kupwara 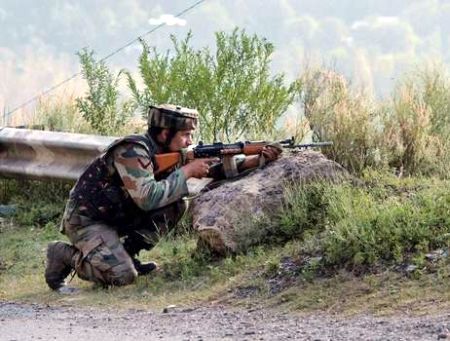 A terrorist was killed in an encounter with security forces in Kupwara district of Jammu and Kashmir on Thursday, the Army said.

"One militant has been killed in the ongoing encounter in the forest area of Kupwara district," an Army official said.

Security forces had launched an operation in the Kandi forest area of Kupwara on Wednesday after a patrol of Army soldiers came under fire from terrorists, the official said.

He said a gunbattle broke out between the two sides in which one soldier was critically injured.

The jawan was evacuated to an Army hospital where he succumbed on Wednesday.

The operation was in progress when last reports came in, he added.

Source: PTI© Copyright 2021 PTI. All rights reserved. Republication or redistribution of PTI content, including by framing or similar means, is expressly prohibited without the prior written consent.
Related News: Army, Kupwara, Kandi, Kashmir, Jammu
SHARE THIS STORY
Print this article