Simmering tension prevailed on the Assam-Mizoram border after a violent clash took place between the people of the two states, injuring several, officials said on Sunday. 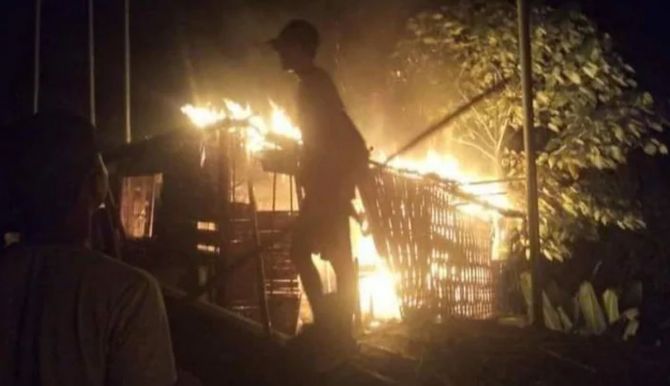 The situation is now under control in the area, which is on the border between the Kolasib district of Mizoram and Cachar district of Assam, they said.

A meeting, chaired by Union Home Secretary Ajay Kumar Bhalla, between the two state will be held on Monday to take stock of the situation, Mizoram Home Minister Lalchamliana said.

Chief secretaries of the two states will be present in the meeting, he said.

Assam Chief Minister Sarbananda Sonowal said he has apprised the Prime Minister's Office and Union home ministry about the prevailing situation in the area.

Sonowal also telephoned Mizoram Chief Minister Zoramthanga and spoke to him on the border incident, stressing on the need to take productive measures and joint efforts to address the border issues.

Zoramthanga assured Sonowal of efforts to maintain peace at the inter-state border and cooperation, the Assam government said in a statement.

The two states have deployed security personnel, including those of the Indian Reserve Battalion, in the violence-hit areas near the Vairengte village in Mizoram and Assam's Lailapur, officials said.

Vairengte in Kolasib district is on the northern fringe of Mizoram through which the National Highway 306 (formerly 54) passes, linking the state to Assam. The nearest village in Assam is Lailapur, which is in the Cachar district.

Kolasib district deputy commissioner H Lalthlangliana said that a large number of Vairengte residents assembled when some people from Assam, armed with sticks and dao, pelted stones at a group near the auto-rickshaw stand on the outskirts of the border village on Saturday evening.

The irate mob from Vairengte retaliated and set on fire about 20 temporary bamboo huts and stalls built along the national highway by residents of Lailapur despite a prohibitory order being in place, he said.

One of the injured persons, who suffered a cut in his neck, was admitted to the Kolasib district hospital and the condition was critical. Three people were being treated at a Public Health Centre in Vairengte, he said.

"Despite the prohibitory order under Section 144 of the CrPC and policemen trying their best, the situation turned violent and became out of control as people gathered in large numbers," he said.

The incident could be the fallout of the demolition of a makeshift hut used by local volunteers who guard the inter-state border near the Saihaipui 'V' village, about 3 km from Vairengte, he said.

The volunteers are guarding the border to check the movement of the people in the wake of the COVID-19 pandemic.

Lalthlangliana said no one died in the clash and one person from Assam was admitted at Silchar Medical College and Hospital.

He said that he has spoken to Cachar deputy commissioner Keerthi Jalli over the violence and asked her to take measures to ensure that the national highway, which has been blocked by the local people, is cleared at the earliest.

The Assam government also said that the situation is under control and senior officials along with police are in the area to defuse the tension.

The state's forest Minister Parimal Shuklabaidya, who is the MLA of Dholai in Cachar, said that such incidents happen in the area every year as people from both the sides illegally cut trees.

Suklabaidya visited Lailapur during the day and interacted with the people.

The incident was the handiwork of miscreants to create disturbance in the community, a statement issued by the Assam government quoted him as saying.

Assuring the people living close to the border of safety and security, Suklabaidya said he would place their demands of police outpost and other security-related issues to higher authorities.

"The government is with you all and will take necessary steps," he told the locals.

Jalli, the deputy commissioner of Cachar, also visited the area along the inter-state border.

She assured the locals that the administration would provide them the security to ward off the "evil machinations at work" to create disturbance between the people of the two states.

Commissioner (Home) Gyanendra Tripathi assured the local people of protection and urged them to live in harmony with the people of Mizoram.

"We got reports of a few temporary houses and stalls being burnt. Police reached the spot and brought the situation under control. We are taking all possible steps to ensure such incidents do not recur in near future," Cachar's Superintendent of Police Bhanwar Lal Meena said.

Security has been beefed up in Lailapur and along the inter-state border, the Assam government said in the statement.

However, former Silchar MP Sushmita Dev of the Congress earlier said that she visited the troubled area but found no officials there.

Lalthangliana said the Kolasib district administration is giving shelter to truck drivers, mostly from Assam, at Kolasib town and Kawnpui village and volunteers of the Young Mizo Association provided them food.

Mizoram's MNF MLA Lalrintluanga Sailo, who is camping at Vairengte, said that his state is not hostile to Assam or its people but is protecting its territory from infiltration by illegal Bangladeshi immigrants, who are living in the border areas.

He claimed that more than 80 per cent of people living along the Assam-Mizoram border are illegal Bangladeshi immigrants.

Sailo alleged that the border dispute is a ploy by some politicians with vested interest to take advantage in view of the Assam election, likely to be held early next year.

At least 11 MLAs of Mizoram's ruling party Mizo National Front, including deputy speaker Lalrinawma, are at present camping in Vairengte.

The Mizoram chief minister also held a cabinet meeting over the border dispute during the day.

"I sincerely request everyone to maintain peace and to kindly not bypass any administrative proceedings," he tweeted.

Speaking to reporters after the meeting, Home Minister Lalchamliana said the Mizoram government has urged Assam to make efforts to defuse the tension and restore peace and tranquility in the border area.

He alleged that recently troubles were created by Assam at three border points -- Thinghlun in Mamit district, and Saihapui 'V' and Vairengte, both in Kolasib.

"We have approached the Centre over the border dispute. Accordingly, Union Home Secretary Ajay Bhalla will hold a virtual meeting with chief secretaries of the two states on Monday to defuse the prevailing border standoff," he said.

At least seven people from Mizoram were injured in the clash that took place on Saturday night, he said.

He said that the state government has sent reinforcement to the border area to stabilise the situation.

Asserting that a 509-square-miles stretch of the inner-line reserve forest notified in 1875 was the actual Mizoram's boundary with Assam, the state home minister said, "We are not trying to encroach on Assam's territory but faithfully protecting our land at all cost."

According to Lalchamliana, Mizoram is likely to face a shortage of essential commodities, especially cooking gas and fuel, due to the indefinite blockade by residents of Lailapur on the national highway, which is the lifeline of the state.

He urged the people, especially traders, not to hoard commodities and hike their prices.

He further asked civil bodies not to act on their own and break law and order.

Mizoram Chief Secretary Lalnunmawia Chuaungo said that the state government has consented to the formation of a boundary commission and officially intimated the matter to the Centre.

He said that the core committee constituted by the state government in connection with the state boundary is studying and assessing old maps and documents.

The two states are often at loggerheads over the boundary, which they dispute.

Recently, a standoff took place near Thinghlun village in Mizoram's Mamit district on the border with Assam's Karimganj when Assam officials allegedly demolished a farm hut erected on the disputed land.

Several dialogues held since 1995 to resolve the border dispute have yielded little results.