Barring clashes at some places, situation was by and large peaceful on Saturday in Kashmir where separatists had planned to take out processions, to prevent which curfew was in force in entire Srinagar district and Anantnag town. 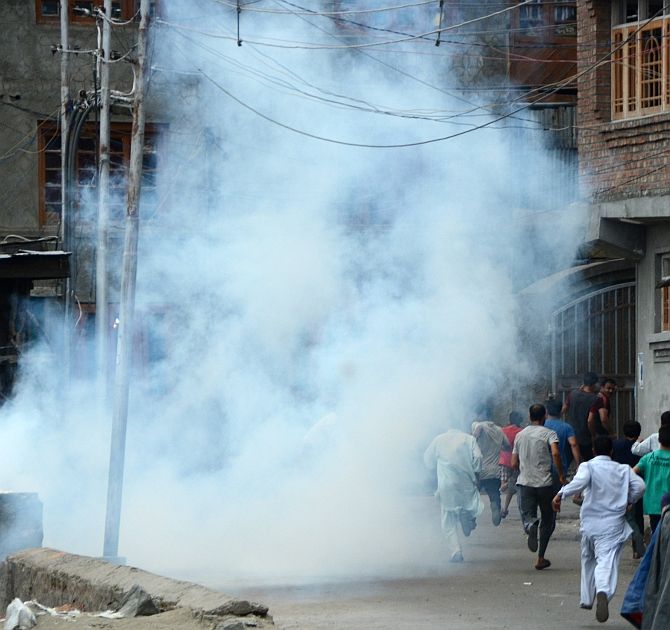 About half a dozen incidents of stone-pelting were reported from different parts of the valley, a police spokesman said.

The policemen were injured in a clash with stone-pelting protesters at Ashtingoo in Bandipora district of north Kashmir, the spokesman said, adding one of the injured was shifted to Delhi for advance treatment.

The clashes were also witnessed at Kanoosa, Aloosa and Kemah villages in Bandipora during the day but there was no report of any casualty, he said.

Barring these clashes, the situation remained by and large peaceful across the valley, the spokesman added.

Earlier, the authorities had imposed curfew in entire Srinagar district to foil the plans of separatists to march to the historic Lal Chowk and stage a sit-in for two days.

Curfew also remained in force in Anantnag town, the epicentre of the current unrest.

Separatist leaders Mirwaiz Umar Farooq and Syed Ali Shah Geelani, both of whom are under house arrest, tried to take out processions from their residences to Lal Chowk but police thwarted their attempts.

In the first instance, Mirwaiz, the chairman of moderate Hurriyat Conference, came out from his Nigeen residence located on the outskirts of Srinagar this afternoon.

He was immediately detained by the police and taken to Nigeen police station, officials said.

Separately, Geelani, who heads hardline faction of Hurriyat Conference, also tried to take out a march from his Hyderpora residence on Srinagar-Airport road.

However, the police stopped the octogenarian leader, following which he along with his supporters staged a sit-in on the link road, officials said.

The sit-in lasted for over half-an-hour and ended peacefully, the officials said.

Meanwhile, the death toll in the ongoing unrest went up to 56 as a youth, Suhail Ahmad Wani, who was injured last week in firing by a policeman, succumbed to injuries at a hospital in Srinagar on Saturday, an official said.

Wani had suffered a bullet injury in the head on August 2 at Lethpora in Pulwama district on Srinagar-Jammu National Highway.

Normal life remained affected in the Valley for the 36th consecutive day due to the curbs imposed by the authorities and separatist-sponsored strike against the killing of civilians in the security forces action.

While mobile internet remained suspended, the broadband services were also snapped on Saturday around 4.30 pm without any reason being assigned for it.

The broadband services were restored after half an hour in some areas of the city like Bemina, Lal Chowk and Sonawar where most of the government offices and official residences of government officials are located.

A BSNL official, on the condition of anonymity, said the the state-run telecom operator was directed by the authorities to pull the plug on the services till August 15.

The mobile internet services were snapped across Kashmir last month as a precautionary measure to prevent rumour mongering following violent clashes in the wake of killing of Hibzul Mujahideen commander Burhan on July 8 in an encounter with security forces.