But the regulator has dropped the proposal of asking flyers to maintain 30 seconds of silence.
Arindam Majumder reports. 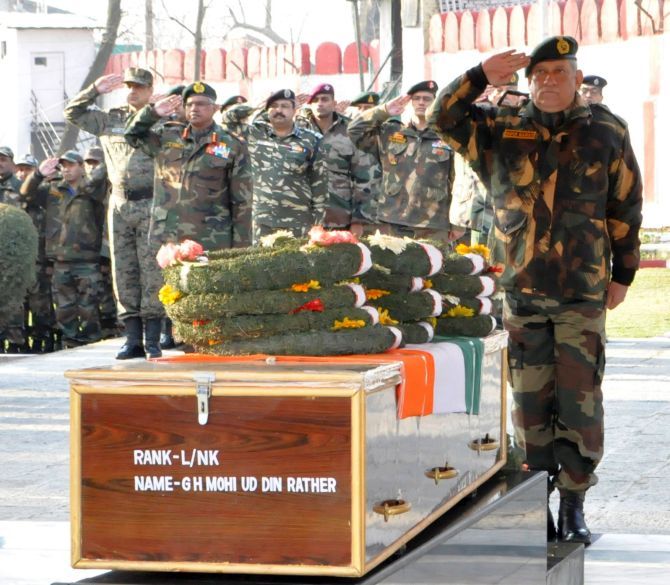 IMAGE: General Bipin Rawat, the chief of the army staff, pays homage to a soldier martyred in Kashmir. Photograph: Umar Ganie for Rediff.com

'Dear passengers, we would like to announce with a sense of gratitude that we are carrying the mortal remains of a brave soldier.'

Don't be surprised if you hear this announcement on any of your future flights.

The government has made it compulsory for airlines to make an announcement whenever they are carrying the body of a soldier.

Also, the Airport Authority of India has been directed to build designated areas to offload the casket.

In a mail addressed to chief executive officers of airlines, the Directorate General of Civil Aviation said the pilot-in-command should make such an announcement before the take-off.

The aviation regulator has, however, dropped the proposal of asking flyers to maintain 30 seconds of silence as a mark of respect towards the martyr.

The DGCA has provided a template of the announcement in both English and Hindi. The announcement will also mention the name, designation and regiment of the soldier.

'He made the supreme sacrifice for the security and safety of the country. Jai Hind,' the pilot has to announce.

While private airlines are yet to put the directive into effect, State-owned Air India has asked its pilots to follow the process.

A senior DGCA official said the instructions had been issued on the demand of the defence ministry.

"Some military veterans have been demanding this for years now, so the government finally took this step and issued the instructions," the official said.

Such an announcement would sensitise passengers in the aircraft as many might wish to pay their homage by maintaining silence, the official said.

In the US, airlines like Alaska Airlines and Delta Air Lines have special programmes for honouring the martyrs.

In 2014, Rajya Sabha MP Rajeev Chandrasekhar had written to then Air India chairman Rohit Nandan, questioning why one of its crew refused to announce the presence of the mortal remains of an army officer on a flight carrying his body from Srinagar to Delhi.

On designated areas for off-loading the caskets, a senior official of the civil aviation ministry said, "While such facilities are available at major airports across the country, smaller airports lack (them). Airports have been asked to build a platform where the caskets can be lowered from the cargo hold of the aircraft and not be kept on the ground."

Airline executives say a diktat from the government wasn't necessary and it should have been made optional, pointing out that there should be coordination between the military and the airline so that the pilot knows the name, regiment, and cause of death of the soldier.

"The military should now coordinate with the airlines so that such details are available to the pilot to announce it," he said.

In recent years, the military has taken initiatives so that the bodies of armed forces personnel killed in action or accidents are transported in Indian Air Force aircraft.

In Delhi, the caskets land at the IAF Palam Technical Area, where the bodies are laid out for the ceremonial military honouring. However, there are instances when servicemen's bodies are transported by commercial airlines.