News
Business
Movies
Sports
Cricket
Get Ahead
Money Tips
Shopping
Sign in  |  Create a Rediffmail account
Rediff.com  » News » 'Can a minor with no moustache commit scam?' Bihar Deputy Chief Minister Tejashwi Yadav on Wednesday said the allegations of corruption against him are full of lies and part of a conspiracy by the Bharatiya Janata Party, its chief Amit Shah and Prime Minister Narendra Modi.

Tejashwi also said the ruling Grand Alliance of the Rashtriya Janata Dal, Janata Dal-United and the Congress in Bihar is strong and it will continue to be intact.

"Allegations against me are false. They’re not just allegations but a conspiracy by the BJP," Tejashwi told reporters after attending a cabinet meeting chaired by Chief Minister Nitish Kumar in Patna.

Tejashwi has made it clear that he will not resign.

He further said that he will go to people to explain ‘how and why the Shah and Modi have conspired against him’.

"The allegations are based on case from 2004 when I was merely 14 years old. Tab to hamare daadhi moonch bhi nahi aaye the (I didn’t even have a beard or a moustache at that time). Do you think a minor could carry out such a scam?" the deputy CM said.

He said some people, including a section of the media, are disappointed over no reports of a break up in the ruling alliance of Bihar.

"The mahagathbandhan (grand alliance) is strong and unbreakable," he said.

He said since he has taken over as the deputy CM, no corruption allegations have been levelled on him or any department under him.

Tejashwi said he and his government strongly believe in zero tolerance against corruption.

His comments come a day after JD-U putting pressure on him to come clean on the issue or step down.

He has been named as an accused by the Central Bureau of Investigation in a case related to a benami property.

However, his party RJD made it clear that he will not resign.

"The RJD has decided that Tejashwi Yadav will not resign," party spokesperson Shakti Yadav said on Wednesday.

Earlier, JD-U spokesperson Ajay Alok had said, "After an FIR is registered, one has to answer the court and the public both. It is everyone’s responsibility to keep the alliance functioning."

According to sources within RJD, an emergency meeting of senior party leaders and MLAs was held after party chief Lalu Prasad Yadav returned from Ranchi on Tuesday night at 10, Circular Road, official residence of Lalu.

It was decided in the meeting that Tejashwi will not be asked to step down.

Earlier on Tuesday, the JD-U had stated that it would not compromise on the issue of corruption, with Chief Minister Nitish Kumar saying, while addressing a party meeting in Patna, “Main apne sidhanto se samjhauta nahi karunga, main corruption ke khilaf zero tolerance par kayam hoon (I won’t compromise with my principles. I’m firm on policy of zero tolerance against corruption).”

Kumar also said his government will do its work and law will take its own course.

Along with Tejashwi and Lalu, former Bihar CM Rabri Devi has also been named as an accused by the CBI in the case relating to transfer of three acres of prime land in Patna to the family by two businessmen allegedly in return for licences to run two IRCTC hotels in Ranchi and Puri when the RJD chief was the railway minister. 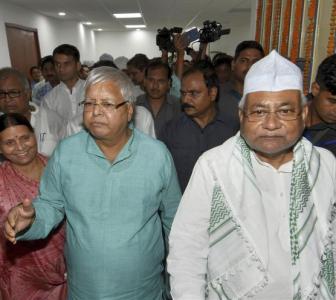 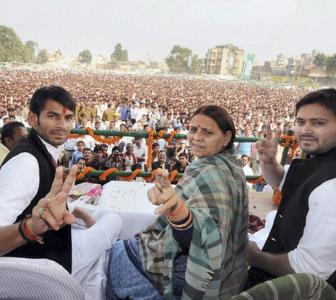 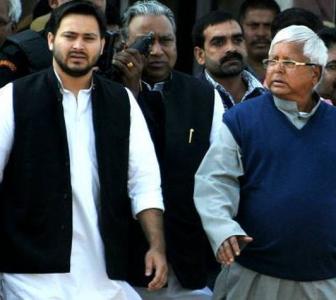