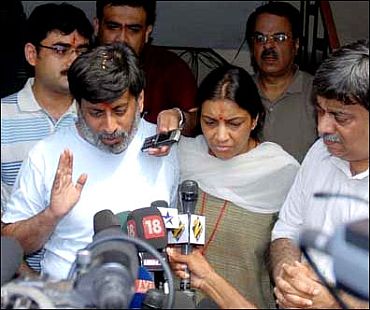 In a major setback to dentist couple Nupur and Rajesh Talwar, the Supreme Court on Friday cleared the decks for their trial in their daughter Aarushi's murder case.

A bench of justices A K Ganguly and J S Khehar dismissed the couple's plea to quash criminal proceedings against them in the sensational 2008 case involving the killing of Talwars' domestic aide Hemraj and their teenaged daughter in Noida on Delhi's outskirts.

The bench said there was nothing wrong in the magistrate's order taking cognisance against them and putting them on trial.

Refusing to interfere with the lower court's order which had rejected the CBI's closure report, the bench said that magistrate gave the ruling after applying his mind.

"We dismiss the appeal," the bench said while clarifying that Friday's order would not prejudice the trial against the accused.