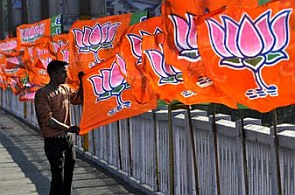 The BJP's Central Election Committee met in the presence of Prime Minister Narendra Modi and cleared the names of 47 nominees. With this, the party completed the choice of all its 90 candidates for the October 15 assembly elections in Haryana.

The party's CEC also declared four of its candidates for the assembly bypolls in Arunachal Pradesh, Manipur, Nagaland and Gujarat.

was recently inducted into the panel.

Vandana Sharma has been fielded from Safidon constituency and former MPs Surender Barwala, who had recently quit INLD to join the party, is BJP candidate in Jind seat.

Another former Congress MP Jitendra Malik has been fielded from Ganaur constituency.

Former State Minister Santosh Sarwan, who was in Congress and was part of Bhajan Lal government, has been fielded by BJP from Mulana (SC) seats.

BJP general secretary and CEC's secretary J P Nadda said the party has tried to give representation to all sections.

BJP leader and incharge of Haryana affairs Jagdish Mukhi said the party has fielded 15 women leaders, which is the highest by any party so far.