After six Trinamool Congress MPs were suspended from Rajya Sabha for a day due to unruly behaviour, they protested outside the upper house lobby during which a door glass was broken that resulted in injury to a woman security officer, sources said on Wednesday. IMAGE: A view of the Rajya Sabha during the Monsoon Session of Parliament, in New Delhi, Wednesday, August 4, 2021. Photograph: RSTV grab via PTI Photo

Thereafter, they started protesting and singing songs outside the entrance of the gallery adjacent to the Central Hall, they said.

After the House was adjourned for the day, the suspended MPs allegedly tried to enter the Rajya Sabha chamber forcefully and during that course, MP Arpita Ghosh allegedly broke the glass of the door in the lobby, which resulted in injury to the security officer, they said.

Joint security of Parliament is drafting a report on the entire incident which will be submitted to the Rajya Sabha Secretary General, the sources said.

Earlier Rajya Sabha Chairman M Venkaiah Naidu suspended the six TMC MPs for the day for carrying placards while protesting along with other opposition MPs over the Pegasus spying issue.

Slogan-shouting TMC and other opposition MPs trooped into the well of the House, some holding placards, to demand a discussion on the issue of Israeli-made, military-grade Pegasus spyware allegedly being used to snoop on opposition leaders, government critics and journalists.

These 'members of the Rajya Sabha who entered the well of the House displayed placards, disobeyed the Chair and whose conduct was grossly disorderly in the House this morning (August 4, 2021) have been directed to withdraw immediately from the Council under rule 255 by the Chairman', it said.

The six MPs, it said, 'shall absent themselves during the remainder of the day's meeting'. 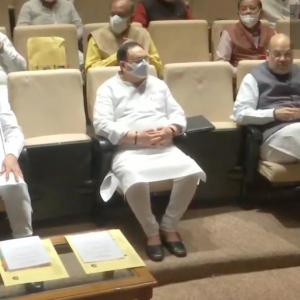 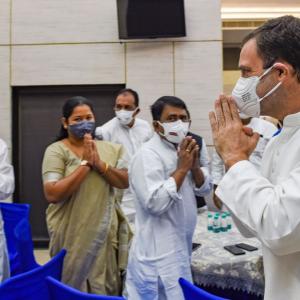