The headquarters of the moderate All Parties Hurriyat Conference on Sunday witnessed ugly scenes as rival supporters clashed with each other during a seminar.

The supporters came to blows as prominent APHC leader Naeem Ahmad Khan started addressing the seminar and criticised senior leadership of the conglomerate.

Supporters of Mirwaiz were on their toes shouting slogans in his favour and against his detractors in the APHC.

The trouble started as Khan demanded action against the former APHC president and chief spokesman Abdul Gani Bhat for his remarks on the United Nations resolutions.

Bhat had said the resolution had become 'impracticable' and had demanded a solution beyond these resolutions. Bhat had also said that he fully supported the 4-point formula of former Pakistan President, Parvez Musharraf.

Later another separatist leader, Shabir Shah while speaking to reporters said that 'why an exception was being made in case of Bhat while in the past the APHC had resorted to expulsion and temporary suspension of separatist leaders who spoke against the Hurriyat constitution'.

Mirwaiz, however, could not attend the seminar as he was placed under house arrest along with other moderate leaders.

The moderate APHC headed by Mirwaiz Moulvi Umar Farooq has called for a shutdown tomorrow to coincide with the death anniversaries of two slain APHC leaders, Mirwaiz Mohammad Farooq and Abdul Gani Lone.

A rally will also be held at the martyr's graveyard in Eidgah grounds on Monday. 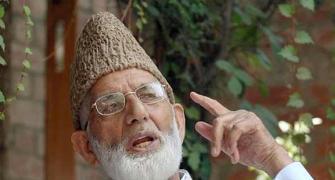