The Supreme Court on Friday asked the Gujarat government to stop any further investigation into the case against social activist Teesta Setalvad for her alleged role in illegal exhumation of the bodies of the 2002 riot victims in Pandarwada, saying that it is a mala fide case.

The bench was hearing a petition by Setalvad against the May 27 last year order of the Gujarat high court, which had refused to quash the FIR registered against her at a police station in Panchmahal district of the state on exhumation of the bodies from a graveyard near River Panam.

The Gujarat government submitted that initially Setalvad was not an accused in the case but during the investigation, her alleged role was found and there are independent witnesses to support the allegations against her. The court agreed to hear the case but said, "It is a mala fide case." "Today we ask you (state) to stop further investigation in the case," the bench said.

At this point, Prasad said that the chargesheet has been filed in the case and investigation was carried when she was not an accused. However, the bench said, "Whatever position stands today shall remain" and posted the matter for July 18.

Prasad also told the bench that in the Gujarat high court there was no plea for quashing the case against Setalvad. During the last hearing, the bench had said that it was a "spurious" case to victimise Setalvad and this type of case does no credit to the Gujarat state in any way.

The state, in its affidavit, had said its probe against Setalvad in the case had showed that she actually planned and executed the digging of the graves without any permission in 2006.

The state had claimed that during the probe into the case, it has emerged that "Teesta Setalvad, the petitioner herein, was the main accused, who actually planned and executed this operation of digging of graves near Pandarwada through her staff."

The government had said the other accused have claimed innocence and had blamed Setalvad for instigating them to carry out the exhumation, which is a penal offence. It was alleged that in 2002, about 28 unidentified bodies of the riot victims from Pandarwada and surrounding villages in Khanpur taluka were buried in the graveyard.

The high court had declined to scrap the FIR, but had quashed the summons, which had said she is absconding. In its May 27, 2011 order, the high court had observed that by showing Setalvad as an absconding accused in the chargesheet filed in April, "a glaring mistake has been committed by the investigating officer".

The FIR had alleged that Setalvad, who had earlier secured anticipatory bail from a local court in Panchmahal district, was the prime conspirator behind the incident. The state government, in its affidavit, had named five accused Rais Khan Pathan, Gulam Kharadi, Sikander Abbas, Qutub Shah Diwan, Jabir Mohammed who in their respective statement blamed Setalvad for instigating them. 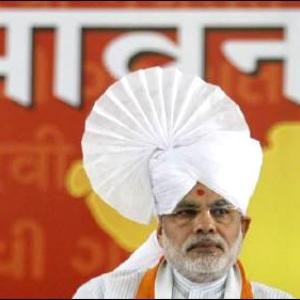 After clean chit, campaign against Modi MUST stop: BJP