6 hurt in stampede at Akhilesh's Janata Durbar in Saifai 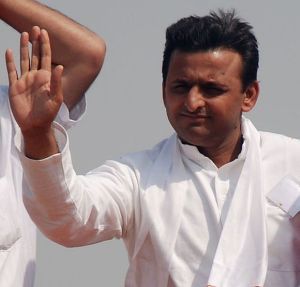 Six people including a Zila Panchayat head were on Sunday injured in a stampede at a Janata Durbar programme of Uttar Pradesh Chief Minister Akhilesh Yadav at his ancestral village of Saifai.

Additional SP Ram Kishan Yadav said a large crowd had gathered outside the public works department guest house where the CM was holding the programme.

The main gate had to be closed to keep the crowd away. But when it was opened to allow a VIP car, people rushed inside causing the stampede, he said.

Six people, including Kannauj Zila Panchayat head Santosh Yadav, were injured in the melee. One person suffered a head injury.

Eyewitnesses said when the chief minister was meeting people and exchanging pleasantries with them, the crowd surged towards him and in the stampede-like situation some fell down and got hurt.

Some mediapersons covering the event were also injured, police said.

All the injured people were rushed to a hospital in Saifai, they said.

This was Akhilesh Yadav’s first visit to Saifai after the recent Samajwadi Party family feud became public. As news of his arrival spread, thousands of people gathered at the venue to wish him on the festive occasion of Diwali.

Police had a tough time trying to manage the crowd as the number of people who turned up at the event was far beyond their expectation.

Akhilesh also interacted with people and listened to the their woes before directing officers to take action. Akhilesh had driven down to his ancestral village Saifai to celebrate Diwali with his extended family.

A large number of people greeted the CM along the 200 km route from Lucknow to Safai as he stopped at various places to meet them on the soon-to-be-inaugurated state-of-the-art Lucknow-Agra Expressway.