Spending a night at Belur Math was like homecoming: PM

Describing Belur Math as a pilgrimage site, Prime Minister Narendra Modi on Sunday said visiting the global headquarters of the Ramakrishna Mission, in Howrah district, was nothing short of 'homecoming' for him. 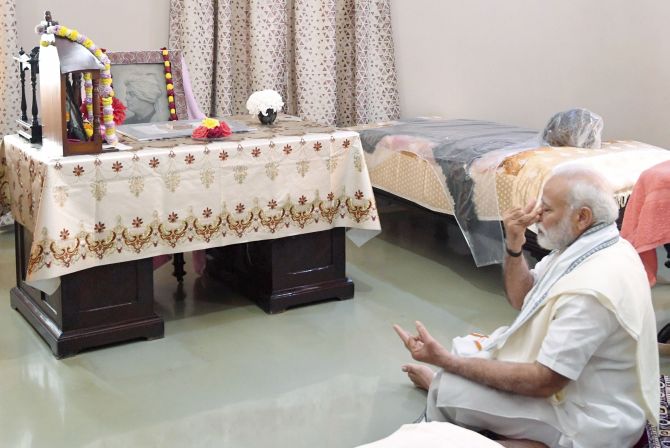 The prime minister also contended that he was grateful to the authorities of the monastic order for granting him an opportunity to spend a night at the math.

"This (place) is no less than a pilgrimage site. To me, this is like coming back home. I am fortunate that the president of Ramakrishna Math and Mission gave me the permission to spend a night here. 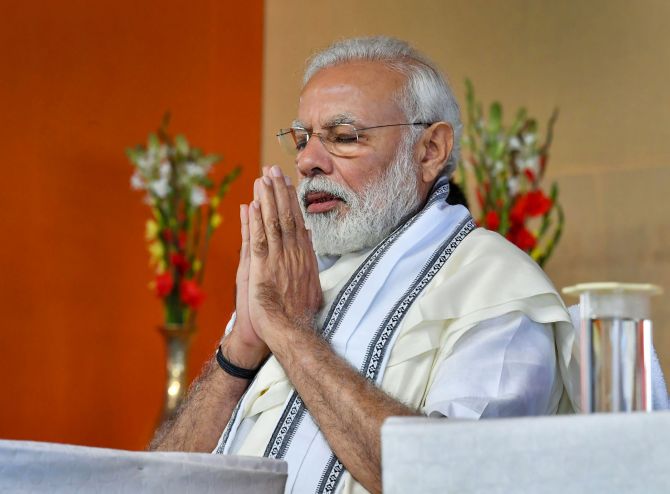 "As per the security protocol, I am not allowed to go anywhere I feel like... I am grateful to the (state) government for allowing me to spend a night here," Modi, who was dressed in a white kurta and dhoti with an uttariya (scarf) round his neck, said while addressing people on the occasion of National Youth Day -- hosted by Math authorities to celebrate the birth anniversary of Swami Vivekananda. 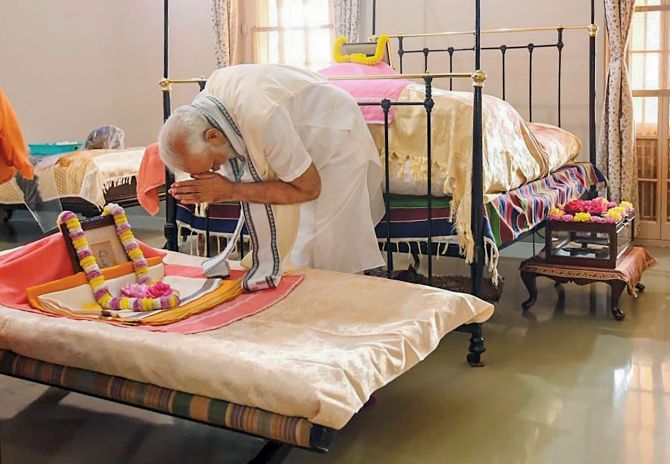 The PM insisted that the ambiance at Belur Math reminded him of his duty towards people.

"This land, its breeze, the water will make you feel the presence of Swami Ramakrishna Paramhangsha, Ma Sarada devi, Swami Brahamananda, Swami Vivekananda and several other saints. Whenever I visit Belur, the place reminds me that my job is to serve the 130 crore people (of this country)," he told a gathering of schoolchildren on the math premises.

Referring to his association with a former president of the mission and his spiritual guru, Swami Atmasthananda, Modi said his teachings broadened minds and showed paths.

He reminisced his time with Swami Atwasthananda and said the saint's words changed the course of his life. 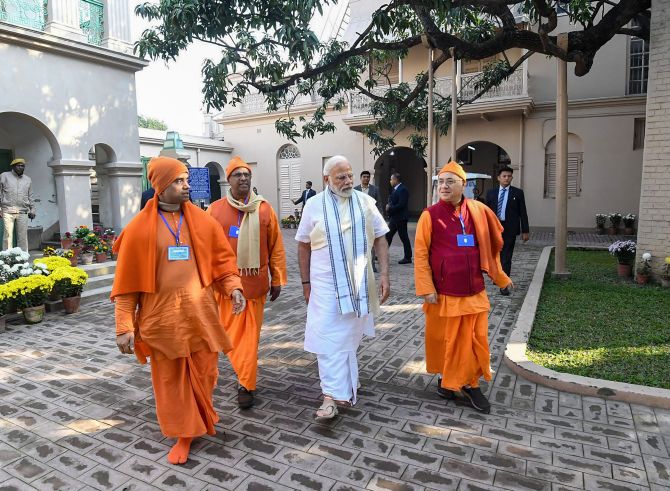 "Last time, I had gone back (from Belur Math) with the blessings of Swami Atmasthananda. He was the one who taught me that jana seva (serving the people) is the way to serve Prabhu (the Almighty). Today, he might not be physically present among us, but his works, teachings will always broaden our minds and paths," the PM said.

In 2013, during his Kolkata visit, Modi had visited Swami Atmasthananda and sought his blessings.

Two years later, he had called on the ailing saint at Ramakrishna Mission Seva Pratisthan, a hospital run by the monastic order in south Kolkata and enquired about his health.

After Swami Atmasthananda's death in 2017, the prime minister had termed it as a 'personal loss'. 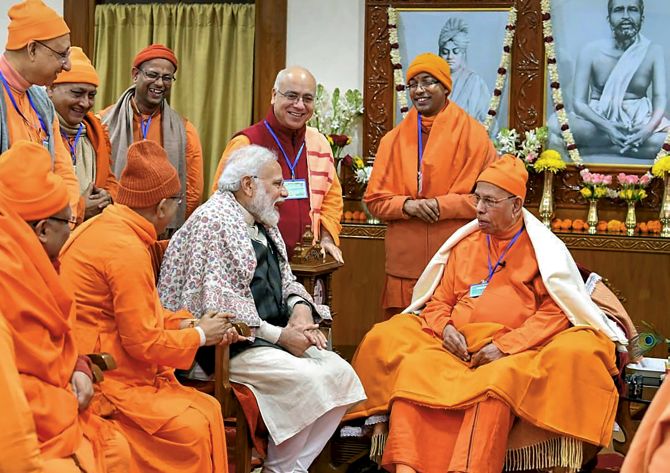 Swami Suvirananda, the Ramakrishna Math and Mission general secretary, said Modi was the first prime minister to spend a night at the math.

"Truly, for us, too, it was like welcoming our son to his home. He is the prime minister and our guest. It's a matter of pride that he expressed his willingness to spend a night here. He is the first PM to have spent a night here. No PM or President had stayed here ever," he said.

On Saturday night, Modi, who was in the city on a two-day visit, was served bhog, which had kheer made of suji, and sabji, he said. 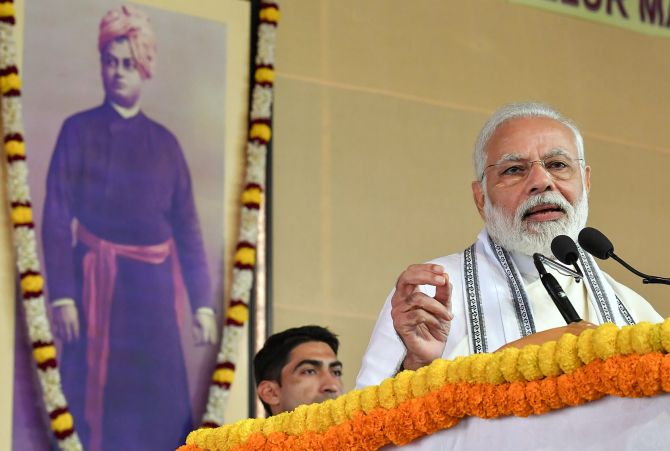 The PM, who generally goes on a walk every morning, made an exception on Sunday as he started his day with a cup of sugar-free tea, followed by upma and dosa for breakfast, the monk said.

"Modi ji took a stroll on the math premises before visiting Swami ji's (Swami Vivekananda) room, where he sat down to meditate. He also offered prayers at the temple," he said.

The mission authorities gifted the prime minister books on Sri Ramakrishna Paramahansa and Swami Vivekananda, among other items. "He interacted with our seers and they took photographs with him," Swami Suvirananda said.

Asked whether the morning-prayer session was specially arranged for the PM, the monk said, "It's a regular affair, the programme is held annually (on the occasion of National Youth Day). We have not arranged anything separately."

Despite the heightened security at Belur Math owing to the prime minister's visit, the mission authorities had on Sunday allowed common people to enter its premises.

"Since, today is the birth anniversary of Swami ji, there was a huge rush. We had allowed the bhakts to enter the math till 8 am, following which it was temporarily closed for visitors. Once the PM left, the math started functioning like any other day," a senior official of the monastic order said.

IMAGES: Prime Minister Narendra Modi visits Belur Math in Howrah district. He meditated, met the monks and paid tribute to Swami Vivekananda on his birth anniversary on Sunday. Photographs: Press Information Bureau of India/PTI Photo and kind courtesy @narendramodi/Twitter
Source: PTI  -  Edited By: Utkarsh Mishra© Copyright 2020 PTI. All rights reserved. Republication or redistribution of PTI content, including by framing or similar means, is expressly prohibited without the prior written consent.
SHARE THIS STORY
Print this article 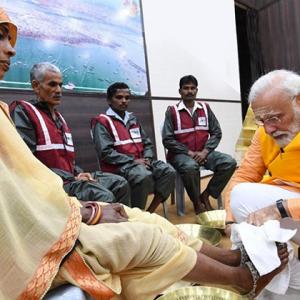 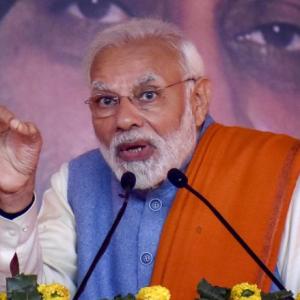 Why PM Modi spent 5 days in jungle every Diwali