Source: PTI
September 16, 2010 18:28 IST
National Conference chief Farooq Abdullah on Thursday met Congress President Sonia Gandhi and the ruling partners are understood to have discussed the situation arising out of the continued unrest in Jammu and Kashmir. In Srinagar, his son and chief minister, Omar Abdullah, fuelled speculation by meeting the state governor N N Vohra.

Farooq Abdullah, also the Union minister for new and renewable energy, sped past waiting newsmen after the meeting at 10, Janpath, Gandhi's residence.

The huddle came ahead of a meeting of the Congress core group which is expected to take stock of the situation in the Valley.

It also came on the heels of Congress general secretary Rahul Gandhi scotching speculation about a political realignment in Jammu and Kashmir.

At a press conference in Kolkata, Rahul had said, "The government has supported Omar Abdullah. National Conference is the party in power. He is a youngster. Kashmir is a difficult place. Omar is doing a tough job and he should be given time and support."

Rahul's remarks as well as Farooq's meeting with Gandhi assume significance in the midst of a reported meeting Mufti Mohammed Sayeed had with the Congress chief and Prime Minister Manmohan Singh on Tuesday night.

It had led to speculation that the two parties could revive their alliance to form a government in Kashmir. 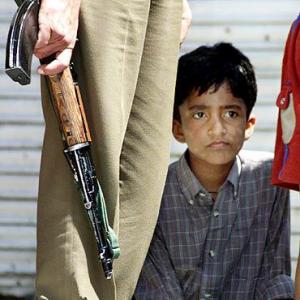