East Bristol Auctions in Hanham, south-west England, said on Sunday that they were pleasantly surprised to find that the spectacles, dropped through their letterbox in an envelope, may have such a rich history behind it.

"It's a huge find of great historical importance. The vendor had presumed them to be interesting, but of no value and did tell me to dispose of them 'if they're not worth anything'," said auctioneer Andy Stowe of East Bristol Auctions.

"I think he nearly fell off his chair when we presented our valuation. It's a really great auction story and one that we all dream of," he said.

The glasses, which have already attracted an online bid for £6,000 pounds, are said to have been in the family of the unnamed elderly gentleman vendor in England, who was told by his father that they were a gift to his uncle when he was working for British Petroleum in South Africa between 1910 and 1930.

"The vendor's uncle definitely worked for British Petroleum in South Africa, and I believe Gandhi didn't wear glasses until the late 1910s early 1920s," says Stowe in reference to the provenance of the glasses, which are likely to be one of Gandhi's earliest pairs during his time in South Africa.

"The story that appears with the lot is exactly what the vendor told us, and exactly what was told to him by his father some 50 years ago," explains Stowe.

The lot, titled 'Pair of Mahatma Gandhi's Personal Spectacles', forms part of the auctioneers' Military, History and Classic Cars online sale and will go under the hammer on August 21. It has already attracted much interest, including from India.

Gandhi became synonymous with the iconic round-rimmed Windsor-style glasses, common during the period when he was studying law in England in the late 1800s and 1900s. While initially used infrequently, the glasses became a regular feature during the national movement and Gandhi's civil disobedience protests in India.

He is known to have handed over his personal items as gifts to admirers and a number of similar items have emerged on the auction circuit over the years. Gandhi's glasses, sandals up for sale 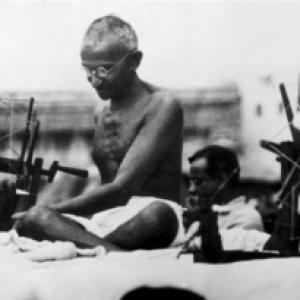 Owning a piece of Gandhi's life is tough in India