Eye of the Predator: The Hunt for Baitullah Mehsud 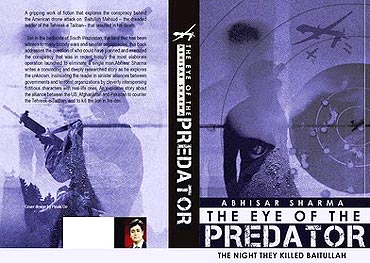 Abhisar Sharma's debut novel is a sordid, yet satisfying, tale of a region and a people about whom we need to learn much more, notes Sandeep Chakravorty.

There is something uncanny about life. The moment one decides to focus on a subject, many related occurrences seem to happen at the same time. As if the constellations line up to seek your indulgence. It could be pure coincidence, but it is rather more likely that the brain becomes more receptive to a certain type of stimuli.

I had a similar experience when I decided to review Abhisar Sharma's first book, The Eye of the Predator. As I started to read the book, I suddenly remembered that it was the same day December 27 but three years ago in 2007, when I learnt on CNN, about the assassination of Begum Benazir Bhutto and how Pakistani officials were blaming Baitullah Mehsud for it.

One had heard about Mehsud before, but it was only after BBB's assassination that the name Baitullah Mehsud registered in our collective consciousness. And around the time I finished reading the book, news came that Nasrullah Babar, transport minister during BBB's first term as prime minister, who is credited with being the brain behind organising the Taliban, had died. Abhisar's tale suddenly seemed to have striking contemporaneousness and topicality.

My own scholarship about Afghanistan is limited. Apart from some professional and journalistic reading, I must admit to having only read Taliban by Ahmed Rashid, The Bear Trap by Brigadier Mohammad Yousaf, and On Edge: The Afghan Passage, a book on Afghanistan by my namesake and service colleague Sandeep Kumar. I have also watched the compelling and touching film, The Kite Runner.

I picked up Abhisar's book thinking that it would be a good way to spend time relaxing on lazy, cold evenings during the Christmas holidays. Soon, I realised to my fascination, that Abhisar had woven a masterly tale with contemporary characters in a land where hardly anything seems to have changed since Babur fought Afghan tribesmen half a millennia back.

The only change perhaps, could be the ubiquitous Kalashnikovs in the hands of the tribesmen, the Toyota SUVs on the ground and the predator drones in the sky. Technology has added spice and dimension into the timeless Afghan story. Abhisar, in his first book, distills 15 years of his journalistic experience into one fictional page-turner about the internecine battles between the various tribes and militant groups in the Af-Pak region.

Skillfully interweaving fact and fiction, Abhisar takes us through the socio-political-religious minefield of the Af-Pak region in general, and Waziristan in particular, as seen through the eyes of the many characters who bring to it their own motives and perspectives. As Baitullah's deputies enter a bloody war for succession, a love story with unforeseeable consequences unfolds, and warlords in collusion with government agencies mastermind the elimination of their arch enemy.

The story opens with a fatal drone attack on Baitullah Mehsud, the dreaded leader of the Tehreek-e-Taliban Pakistan. The rest of the plot unfolds in a series of flashbacks, the first of which show Baitullah teetering on the edge of sanity, caused by his failing health and paranoia. The body of the narrative charts the rise of Mehsud and his eventual formation and leadership of the TTP.

His larger-than-life persona creates (literally) die-hard followers out of a ragtag bunch of tribal warriors and mercenaries, even as it earns him the envy of rival warlords struggling for an entry into the region's political landscape. Abhisar fleshes out his characters with such ease that even as one nears the foregone conclusion of the book, one cannot help but feel some amount of pity for the protagonist's rapid descent into madness and decay.

Mullah Omar hatches a devious plot to eliminate Mehsud, who becomes a thorn in his side. Mehsud has been undermining Mullah's position by constant attacks on the Pakistani establishment, which fuel Mehsud's growing, cult-like power in the region. While Mullah's parish is Afghanistan, Mehsud dreams of ruling Pakistan.

The Eye of the Predator is a compelling tale of the clash of these two mercurial and ruthless men. Abhisar, for the first time (to the best of my knowledge) attempts to give a face, mind and heart to the characters of Mullah Omar and Baitullah Mehsud.

In the case of Mullah Omar, Abhisar is able to draw a picture of this much-feared one-eyed terror and brings out the frailties of the so called pious 'Emir of Afghanistan' who is equally driven by the basic human instincts of survival and greed.

But Mehsud's head is wanted by not just Mullah Omar, but the ISI and the Americans as well. And thus begins a story of subterfuge, intrigue and double games played amongst three major powers, with -- for the moment at least -- one major aim; the killing of Baitullah Mehsud.

As Baitullah's deputies enter a skirmish for succession post his death, Abhisar introduces the poignant character of Majid, a young Hazara boy from Bamiyan.

The destruction of the region's iconic Buddha statues by the Taliban is Majid's first introduction to brutal extremism. This is followed soon after by the slaughter of his family at the hands of the Taliban, leaving him and his sister as the sole survivors of the carnage.

Majid eventually escapes to Pakistan to get away from his survivor's-guilt, and settles down in Zanghara, where a tender love story blossoms between him and a Pashto girl, Zubeida. Majid's sense of desperation, guilt and loving care towards his sister is a humane characterisation by Abhisar in an otherwise gruesome, gory tale of intrigue and deceit.

The character of Majid brings a touch of innocence in a story densely peopled by warlords, weapons and conspiracies. After a point, I found myself rooting for Majid, hoping that he would succeed in his endeavour of love. That Abhisar is able to involve the reader in his tale is a major strength of the book.

Abhisar combines a journalistic eye for detail, with a fictional story arc that keeps readers engrossed. The writing is direct and unencumbered by fancy rhetoric, and the author escapes the tendency of first-time writers to embroider his story with superfluous prose. However, in many parts the narrative is rather simplistic and clearly not literary. Another irritant in the book is incessant repetition of facts like Mehsud's diabetes and technical details of how a drone functions.

Taut editing would have helped the book to be a racier read. Abhisar will surely tighten his language in his subsequent outputs. I would have also liked a map of the region since one is not normally familiar with places and towns of Waziristan, particularly as the narrative of the book moves from place to place.

Despite these shortcomings, The Eye of the Predator is a worthy effort by a burgeoning talent. It is a sordid yet satisfying tale of a region and a people about whom we need to learn much more.

Sandeep Chakravorty is a member of the Indian Foreign Service. The views expressed in this feature are personal.

Wanted: A special envoy for Af-Pak