The legend that is K Subrahmanyam 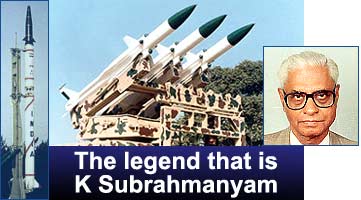 We are gathered to honour the country's leading security guru -- K Subrahmanyam.

I'm miscast in being asked to deliver the keynote address as I do not belong to the security or strategic community. Yet I am privileged to be here as a friend and admirer of Subbu as he is best known and am grateful to Professor Kumaraswamy and Sage for the invitation.

'Security and Survival' is a fitting tribute to the man.

I first got to know Subbu in 1966, soon after joining the prime minister's office as information adviser. On May 9, 1966, within three months of Indira Gandhi taking office as prime minister, China conducted its third nuclear test and the PM was called upon to make a statement in Parliament. This revealed the absence of any clear policy. This led me to suggest the need to set up a group that might spell out the political, security, technological and economic aspects of a national nuclear policy.

I thereupon invited a small group a week later for a brainstorming session over lunch. But who could speak from the defence angle? Someone named a bright deputy secretary in the defence ministry, K Subrahmanyam. And so it was that I contacted him. Others present were Homi Sethna, director of BARC, Bombay, Pitamber Pant of the Planning Commission, S Gopal from the MEA, Romesh Thapar, the journalist -- then close to Indira Gandhi, and myself.

Sethna talked about the wherewithal and costs and gave a time estimate for a nuclear test and development of a delivery system within a period of five years. Subbu and Gopal believed that reliance on any US nuclear guarantee to India would steadily diminish as China's capability increased. Pitamber was concerned about the cost of an Indian nuclear programme even after offsetting the technological gains. We dispersed after agreeing to put together a paper, with Sethna doing the technological part, Subbu covering the security dimensions, and Gopal writing on the diplomatic implications.

I reported on the discussion to Mrs G and L K Jha. At a meeting of the Atomic Energy Commission in Bombay a week later, at which (Vikram) Sarabhai was named the new chairman AEC and secretary department of Atomic Energy in place of the late Homi Bhabha, a tentative approval was given for a study of a nuclear weapons programme and missile system. Meanwhile, word somehow leaked of our informal luncheon group and the PM told me she had been accosted by (The Hindu's) G K Reddy and Inder Jit after a press conference and asked when our 'committee' would submit its 'report'!

By then, however, the matter had formally passed into official hands.

Subbu may recall these events that played a part in launching him into what became a career path in the area of nuclear, security and strategic studies that he has since dominated. His induction as head of the newly established IDSA (Institute of Defence Studies and Analyses) from 1968 to 1972 and again from 1980 to 1987 enabled him to add scholarship and depth to his in-house knowledge and experience in this field. This was enriched by stints as home secretary Tamil Nadu, which gave him some exposure to matters of internal security, secretary, defence production, and chairman, Joint Intelligence Committee in between his IDSA years. The IDSA period also allowed him to study and visit abroad and to participate in Pugwash meetings, all of which sharpened his world view.

Nuclear issues were always contentious in India and for quite some time Subbu was rated a prime nuclear hawk. I too shared that view for a while but was gradually persuaded by his logic that the NPT and its affiliates made for an unequal and unfair world and that without a credible minimum deterrent of its own, India would never be able to grow to its full stature, being subject to a variety of pressures or nuclear blackmail. That forecast was indeed borne out by subsequent events.

The Track-II Indo-Pakistan Neemrana meetings commenced in 1990. Both Subbu and I participated. For me and many others, including the Pakistan team that comprised leading diplomats, generals and scholars, these became bi-annual tutorials by Subbu in nuclear-strategic learning amid the shifting sands of the post-Cold War world. Early ideas on a Indo-Pakistan nuclear restraint regime through concepts such as a nuclear safe zone and a variety of other confidence building
measures were honed at Neemrana meetings and conveyed back to the two governments and military establishments for consideration. Subbu would with great clarity place these discussion within the framework of the fast changing international scene, keeping a wary eye on what was happening in and between China, Korea, Iran and Pakistan as well as in NATO, Russia and Israel.

No surprise then that Subbu was named convener of the first National Security Advisory Board, which he steered with distinction, establishing guidelines and conventions, always through consensus. The first NSAB will be remembered for two things above all. It wrote the draft Nuclear Doctrine, which the government subsequently adopted virtually in toto. It also
submitted to government a National Strategic Review, looking at all aspects of security in a holistic manner. This was perhaps the first time that such a document had ever been prepared.

Subbu's regret was and remains that the National Security Council has yet to come into its own. He was critical of the posts of national security adviser and principal secretary to the PM being combined in a single person, albeit a highly competent one. He also kept urging that the NSC should meet as a deliberative body to look at long term threats and responses and not be upstaged by the Cabinet Committee on Security which is charged with current decision making. The broad commonality of membership, with the deputy chairman of the Planning Commission also joining the latter body, created the optical illusion of the NSC at work!

A more challenging task came Subbu's way when he was asked to head the Kargil Review Committee, on which General K K Hazari, Satish Chandra and I also served. The press and Parliament were baying for blood and wanted to see heads roll and, for that reason, completely missed the purpose and potency of the KRC. The Committee was seen as a toothless body in relation to a commission of inquiry or JPC and was felt to have vague terms of reference that could only result in a
whitewash. Nothing could have been more mistaken.

The KRC was not an inquisitorial body charged with fixing responsibility but was asked to review events leading up to the event and to recommend measures to prevent such armed incursions in future. This gave the Committee a broad remit and great flexibility. Further, it freed it from what have all too often been the narrowly interpreted confines and lumbering gait
of Commissions of Inquiry, many of which have proved ineffective. Indeed, the pious notion that judges epitomise ultimate wisdom in all circumstances has invariably confused the judicious with the judicial in the consideration of complex political and social issues. JPCs too have failed to deliver on account of the play of partisan politics.

In the space of time that it takes most Commissions of Inquiry to commence their task, the KRC completed its work and put out its report in the form of a commercial publication through Sage. The procedure adopted was novel. The KRC had the Cabinet secretary send out a letter calling on all departments of government, including the military, paramilitary and intelligence services, to share full information with the Committee. This opened all doors.

Current and former prime ministers, defence, foreign and home ministers, service and intelligence chiefs, the defence science, nuclear and space research heads and media and other persons were invited to meet the Committee. The transcripts were sent back to them for any additions or amendments and were then returned under their signatures. The Committee had access to all echelons in the field, down to the lowest level. No commission or JPC since Independence has enjoyed the degree of access and trust vouchsafed to the KRC.

On receipt of the report, the government set up a group of ministers -- home, defence, external affairs and finance. This discussed and adopted the Committee's findings and recommendations and immediately established four task forces to flesh out details of the proposed reorganisation and restructuring of higher defence management, the intelligence services,
internal security and border management.

For the first time since Independence the most sacred of sacred cows in government were subjected to intensive review and reform thanks to a process initiated by the KRC. Much has been or is in process of being implemented. More remains to be done, including the appointment of a CDS.

The credit for the leadership and foresight for this truly massive churning exercise must go to Subbu. His incisive frank-speak did not always earn him friends. But he did the state immense service.

The K Subrahmanyam interview: 'Our ruling elite is totally indifferent to national security'

Most unfortunately, the government has not yet released the 17 annexures to the KRC which were carefully sanitised for publication. They contain a wealth of evidence and detail whose publication would be vastly educative at every level. Among other things they graphically tell the inside story of India's nuclear weapons programme in the words of the principal political,
scientific and military actors.

This mistaken reticence underlines another of Subbu's insistent themes. The communications revolution has created a real time, borderless world in which it is foolish, even dangerous, not to keep one's own people and the world informed as instantly, as fully and as truthfully as possible. The information age demands what may be termed first strike information capability -- not propaganda, but genuine and germane information with the necessary background and placed in
context.

The K Subrahmanyam interview, II: 'Who is supervising RAW?'

Over the past many years Subbu has assumed a new avatar as a journalist and commentator. His columns and editorials are ornaments in a great newspaper that has otherwise sadly lost its way. I recall the articles he wrote for The Indian Express at my request in 1984 after his flight was hijacked to Pakistan.

On the perennial topic of J&K, Subbu wrote a seminal paper entitled 'Kashmir' in the May 1990 issue of IDSA's strategic analysis. If the government is looking for a road map for moving forward the peace process with Pakistan, they could not do better than read that essay.

More recently, he headed a team that reported to the government on the establishment of a National Defence University, as suggested by the KRC. But in truth, for all these many years, Subbu has in fact been standing in as something of a one-man defence university. We salute him.

B G Verghese, former editor of The Hindustan Times and media adviser to Indira Gandhi, delivered the K Subrahmanyam felicitation address on September 18.

B G Verghese
SHARE THIS STORY
Print this article