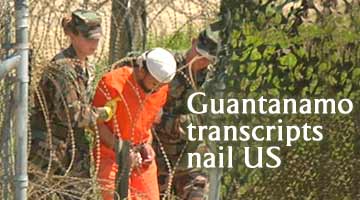 One Guantanamo prisoner told a military panel that American troops beat him so badly he wets his pants.

Another detainee claimed US troops stripped prisoners in Afghanistan and intimidated them with dogs so they would admit to militant activity.

Tales of alleged abuse and forced confessions are among some 1,000 pages of tribunal transcripts the US government released to the Associated Press under a Freedom of Information Act lawsuit -- the second batch of documents AP has received in 10 days.

The testimonies offer a glimpse into the secretive world of Guantanamo Bay, Cuba, where about 520 men from 40 countries remain held, accused of having links to Afghanistan's ousted Taliban regime or Osama bin Laden's al-Qaida network. Many have been held for three years.

Whether the stories are true may never be known. And it wasn't immediately clear how many abuse allegations had been logged from the tribunals or how many of them had been investigated.

Dozens of complaints have surfaced from detention missions in Afghanistan, Iraq and Guantanamo, but the government couldn't offer a breakdown Monday.

One detainee, whose name and nationality were blacked out like most others in the transcripts, said his medical problems from alleged abuse have not been taken seriously.

"Americans hit me and beat me up so badly I believe I'm sexually dysfunctional. I don't know if I'll be able to sleep with my wife or not," he said. "I can't control my urination, and sometimes I put toilet paper down there so I won't wet my pants."

The tribunal president promised to take up the man's medical complaint, but in five pages of questioning, never brought up the alleged abuse.

The panel members were charged with determining whether the men were enemy combatants -- not with investigating abuse allegations, said a military spokeswoman, Navy Capt. Beci Brenton.

She said tribunal members are supposed to forward abuse allegations to the Joint Task Force running the detention mission, which then forwards them to US Southern Command in Miami.

In a statement Sunday, the Pentagon said many of the men have been trained to lie.

US troops treat detainees humanely and "US policy condemns and prohibits torture," the statement said, adding that authorities take claims of abuse seriously.

Since its construction three years ago after the September 11 terror attacks, the prison camp at Guantanamo has come under scrutiny by critics who contend it has outlived its usefulness, producing scant intelligence information and stoking anti-American hatred.

The government had refused to provide the bulk of the testimonies made during the hearings unless reporters traveled to the remote base in eastern Cuba.

It was only after the AP's lawsuit and the tribunals that ended in January that the government released dozens of transcripts.

The tribunals were hastily established after the US Supreme Court ruled in June that Guantanamo prisoners could challenge their detentions before US courts, dealing a blow to the government's argument that as foreigners on foreign soil they had no legal recourse.

With only four men charged to date and military trials stalled because of appeals in US courts, it may be even longer before the fate of the prisoners is sorted out.

The enemy combatant tribunals ended with 38 of 580 detainees ordered released, with more than 20 freed so far. Now the US military is conducting review board hearings to determine whether the prisoners hold valuable intelligence information or if they present a threat.

About half of the detainees refused to attend the enemy combatant hearings, where they were represented by military-appointed lawyers. Although they were not allowed their own attorneys, some of their testimonies have been entered as evidence in the US court cases.

The ones who attended seemed eager to tell their stories -- the first chance for many aside from talking with prison guards and interrogators.

One man claimed he was working with the Americans and the US-backed Northern Alliance.

"I was working with you and now I am here, and I see those people here that I helped capture in Afghanistan," said the purported former commander, adding he fears if he's ever released to his country he will be killed because of information he has provided to the Americans.

Stories of false accusations abound. One prisoner said he was in Afghanistan to buy heroin so he could sell it to open a nightclub in Europe, another said he was a goat herder -- while others said they offered false confessions to their captors to make alleged abuse stop.

A 24-year-old detainee said he confessed to giving a militant group the names and serial numbers of security personnel assigned to Afghanistan's President Hamid Karzai but "I said this under torture."

He described how an American interrogator "threatened me with a gun to my mouth, to try to make me say something."

The tribunal president asked him about the alleged torture, established it was purportedly carried out at a US facility in Kabul by an American, then moved on to other questions.

Another Muslim prisoner from Uzbekistan talked of abuse he had suffered and how he was given a Bible -- not a Quran.

The testimonies also brought up allegations that interrogators --hastily recruited after the September 11 terror attacks -- may have manipulated the confessions.

"When I was in the Kandahar prison, the interrogator hit my arm and told me I received training in mortars," a man said, referring to the US detention camp in western Afghanistan where the Taliban rose to power.

"As he was hitting me, I kept telling him, no I didn't receive training. I was crying and finally I told him I did receive the training. My hands were tied behind my back and my knees were on the ground and my head was bleeding. I was in a lot of pain. ... At that point, with all my suffering, if he had asked me if I was Osama bin Laden, I would have said yes.

"What is my crime? Because of the United States, my hand is handicapped. I can't work."

Another man alleged that US troops stripped the prisoners of their clothes in Afghanistan and bullied them into saying things the Americans wanted to hear.

"Americans were beating us really hard, and they had dogs behind us and they said if we didn't say this, they would release the dogs," he said.

The tribunal president made no comment and moved on to the next question: Where were you born?

While most of the prisoners denied the accusations that led to their imprisonment, some freely admitted joining the Taliban but wanted to be charged and tried for their alleged crimes.

"It seems like you are keeping and detaining innocent people," said one detainee, accused of asking Afghan soldiers for guns to fight Americans.

Although detainees sought to call witnesses from abroad to vouch for them during the tribunals, many requests were rejected as irrelevant and approved witnesses didn't appear because requests to their government to track them down got no response, according to the transcripts.

In more than 3,500 pages of testimonies, the only witnesses are other detainees.

"All the rules in the United States and in the world, the person is innocent until you prove he is guilty, not innocent. But here, with Americans, the detainees are guilty until proven innocent," one detainee complained.

One prisoner told the tribunal that some of his fellow detainees at Guantanamo are sick and elderly. "I found my brothers being tortured in Kandahar and here," he said.

He compared his detention at Guantanamo to the 1998 Hollywood movie "The Siege," in which Arabs are indiscriminately hunted down and detained in New York City after a terrorist attack.

"I was shocked, thinking am I in that movie or on a stage in Hollywood? Is this really happening? Sometimes I laugh at myself and say when does that movie end?" he says.

(Paisley Dodds, Associated Press bureau chief in London, has covered the US prison at Guantanamo Bay, Cuba, since it opened in 2002. AP writers Michelle Faul, Frank Griffiths, and Alexandra Olson in Puerto Rico and Peter Prengaman in Haiti contributed to this report.)

Paisley Dodds in London
Copyright © 2021 The Associated Press. All rights reserved. The information contained in the AP News report may not be published, broadcast, rewritten or redistributed without the prior written authority of The Associated Press.
SHARE THIS STORY
Print this article