SP-BSP friends in UP, foes in Karnataka Politics indeed makes strange bedfellows as two non-Bharatiya Janata Parties -- the Samajwadi Party and the Bahujan Samaj Party -- that halted the saffron party's juggernaut in Gorakhpur and Phulpur, are no more 'friends' in Karnataka and going separately there.

But when it came to contesting Karnataka assembly polls, the two parties decided to go seperatley.

The SP and the BSP had also contested the recent Gujarat assembly polls separately. In the UP civic polls too these two parties had contested separately.

Similarly, during the 2017 assembly elections, the SP and the Congress had formed an electoral alliance.

But, the tie up appeared to have withered away during other elections that followed the assembly polls, especially civic body polls, followed by by-elections to the two Lok Sabha seats and Rajya Sabha and Legislative Council biennial elections.

"Our tie-up was only for the UP Lok Sabha by polls for Gorakhpur and Phulpur. Nothing has been finalised yet for an understanding in other states. We Samajwadis, however, want all secular forces to unite..", SP spokesman Rajendra Chowdhury said.

BSP supremo Mayawati, whose party has entered into a pact with former prime miniser HD Deve Gowda's Janata Dal-Secular, has already started working in the state and had held rallies in Mysuru and Chitradurga and will be holding rallies in Belagavi and Bidar on May 5-6 respectively.

The BSP is contesting on 20 seats in Karnataka and is hoping to open an account there with the JD-S support.

While Akhilesh Yadav, who was scheduled to address rallies in favour of party candidates in Karnataka is still in dilemma.

"Nothing has yet been finalised. He (Akhilesh) might not campaign in Karnataka," Chowdhury said.

SP Karnataka State President Robin Mathews said that party is contesting on 27 seats in the state claiming that "party would get success in polls".

When asked about the party's campaigning strategy for polls, Mathews said all party leaders will be campaigning here.

"All top leaders will be campaigning here in support of party candidates" he said exuding confidence that 'party President Akhilesh Yadav will be surely coming for their support.

Uttar Pradesh Chief Minister Adityanath will be seen in action addressing as many as 35 rallies and road shows the saffron party has organised for him as the Nath sect, to which he belongs, wields considerable clout in coastal Karnataka, BJP sources said.

Polling will be held in a single phase on May 12 for all the 224-assembly seats in Congress-ruled state, including 36 reserved for the Scheduled Castes and 15 for Scheduled Tribes. 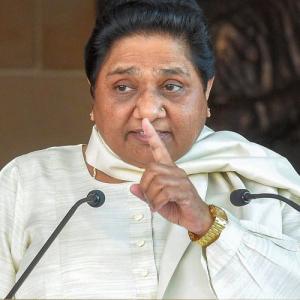