Smaller caste-based political parties, which are considered as potential spoilers, have failed to make a strong impact on political equations in Uttar Pradesh.

In the last six decades of electoral politics, a number of registered but unrecognised parties tested their luck and appeal in the state, but barring a few they failed to impress the voters.

A major achievement came in 1969 when Chaudhary Charan Singh-led Bhartiya Kranti Dal, a registered but unrecognized party, won 98 seats in the house of 425 and emerged as the second largest party after Congress.

Republican Party, which started caste-based politics in the state, tasted some success initially but after its merger with Congress, this type of political agenda was sidelined for almost one and a half decade.

The emergence of the Bahujan Samaj Party in 1985 and its success once again bolstered the morale of parties following caste-based politics after which a series of parties emerged on the scene including Apna Dal, Rashtriya Swabhiman Party, Indian Justice  Party and Lok Janshakti Party.

With the start of Ram temple movement in late 1980s, some parties such as Shiv Sena also indulged in religion-based politics.

A view of the electoral politics reveals that since 1985, the number of registered but unrecognised parties has been on rise. From two parties in 1985 polls, it rose to 111 by 2007 Assembly elections.

As per the Election Commission data, not a single unrecognised party participated in 1952, 1957 and 1967 state Assembly elections.

In 1962 when such parties made their entry into electoral politics, their vote percentage of merely 5.09 per cent. In 1969, 16 smaller parties fielded 658 candidates of which 100 were successful, including 98 of Charan Singh led Bhartiya Kranti Dal. The vote share of smaller parties was 23.41 per cent.

However, Charan Singh's victory failed to make a major impact as Congress went on to form the government with 211 members in house of 402.

In 1974 Assembly polls, 15 smaller parties fielded 368 candidates of which only two won and security of 360 was forfeited. The vote percentage was 2.18 per cent. In the consecutive election in 1977, seven smaller parties fielded 111 candidates of which 110 lost their security deposit and their vote percentage was only 0.45 per cent.

In recent years, 34 smaller parties fielded 645 candidates in 1991 Assembly elections of which only two managed to enter Vidhan Sabha, whereas deposit of 641 was forfeited.

In this election more than 300 registered but unrecognised parties are in the fray. 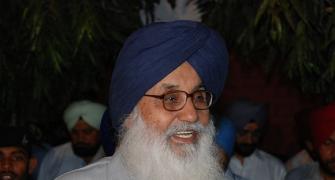