"Various countries and world organisations are making efforts to take action against Sri Lanka for human rights violations and war crimes by the Rajapaksa government. The speech of Sri Lankan defence secretary and brother of President Mahinda Rajapaksa -- that LTTE will attack again -- is aimed at diverting the world's attention," he said.

Gotabhaya had said although the LTTE's military leadership was destroyed, it was important to understand that this was only one part of the LTTE's vast organisation.

"The rest of the organisation is still at large, and although it has adopted a democratic face in its international dealings, there is no doubt that its members will try very hard to restart the conflict in Sri Lanka," he had said.

Karunanidhi alleged that Colombo was trying to "blunt" the resolution being brought by the United States against Sri Lankan President Mahinda Rajapaksa before the United Nations Human Rights Council in March.

Referring to the decision of Canada to stay away from the Commonwealth Heads of Government Meeting hosted by Colombo in November, he said the world has started realising the "atrocities" committed by the Rajapaksa government. 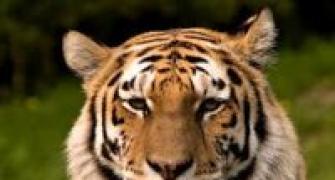 'Tiger, leopard may be killed if posing danger to humans'
Sri Lankan President on a private visit to India