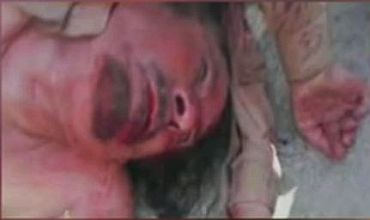 Ousted Libyan dictator Muammar Gaddafi, a maverick who had ruled the country with an iron hand for over four decades, was shot and killed by the rebels on Thursday in his hometown of Sirte after weeks of heavy fighting.

The former Libyan strongman died of his wounds after being captured from a hole where he had been hiding. He breathed his last when he was being transported, reports said.

"It is a historic moment. It is the end of tyranny and dictatorship. Gaddafi has met his fate." Abdul Hakim Belhaj, an NTC military leader, also said that 69-year-old Gaddafi has been killed, pan-Arabic satellite channel Al-Jazeera reported.

Gaddafi's body was taken to a location which is being kept secret for security reasons, another NTC official was quoted as saying.

Gaddafi, who ruled Libya for 42 years, was captured by the rebels who shot him and injured him severely with bullets. Celebrations broke out on the streets of Tripoli on news of capture of Gaddafi with the rebels going around the streets with guns in hands and cars out on the roads honking horns.

Al-Jazeera quoted a senior NTC official as saying that Gaddafi died of his wounds after being captured. The news came shortly after NTC claimed that it had captured Sirte after weeks of fighting.

NATO and the US State Department said they cannot confirm the reports of Gaddafi's death.

Reacting to the development, Libyan Information Minister Mahmoud Shammam said, "It's a great victory for the Libyan people."

An NTC military official said that Abu Bakr Younus Jabr, the head of Gaddafi's armed forces, was also killed in Sirte. Gaddafi came to power in a bloodless coup against King Idris in 1969, when he was just an army captain.

He claimed to be "King of Kings," a title he had a gathering of tribal leaders grant him in 2008. But the revolt against his rule that began in February evolved into civil war, leading to his ouster from power.

Earlier in the day, anti-Gaddafi forces said they had wrested control of the last holdout of loyalists in Gaddafi's hometown of Sirte. NTC had been waiting for weeks for the coastal city of Sirte to fall to officially declare liberation.

Gaddafi, wanted by the International Criminal Court in The Hague in the Netherlands for alleged crimes against humanity, had not been seen in public in months.

Anti-Gaddafi fighters in Sirte celebrated by firing in the air, BBC said. Interim government forces had been facing heavy resistance from snipers in the city, and used heavy artillery during the offensive.

Thousands of civilians had fled Sirte. The NTC has also suffered heavy casualties in the town of Bani Walid, south-east of Tripoli, in recent weeks.

Click NEXT to see more images of rebel fighters claiming victory in Sirte and consequent celebrations at Tripoli..

Please do a mouse-over on the images to read the caption..