Devastated by the "horrific" turn of events at a Wisconsin gurdwara, the family of slain gunman Wade Micheal Page has expressed regret over his actions and said they shared the grief of the victims and their kin.

The family said they would cooperate in the investigation but requested for their privacy to be respected.

"As the family of Wade Page, we are devastated by the horrific events that occurred Sunday in Oak Creek Wisconsin," the family said in a statement.

"While there can be no words of comfort that will make sense of what happened that day, please be aware that our thoughts and prayers go out to all the victims and their families," the statement said.

"We share in their grief for all who lost their lives that day and for those survivors, we hope for a speedy recovery," the family said.

"Please respect our privacy as we try to deal with the tragic loss of life and family," the family statement said.

Page's grandmother, Elaine Lenz, who lives in Denver, and was said to be close to the former soldier, also expressed regret over his actions that claimed six lives.

"I'm sorry he has caused so much trouble," she said in an interview to the Milwaukee Journal Sentinel.

She said Page had sent her a dozen roses two weeks ago, "just to tell me he loved me."

Laura Page, the step mother of the alleged gunman, said that her stepson was "kind and gentle and loving" during his childhood.

"Where he changed and where this came from, we have no idea," Page told the newspaper from her home in Denver.

Page was 10 when the couple married and his birth mother died from lupus three years later.

"He was devastated," Laura Page told the Journal Sentinel.

Laura Page and Jesse Alvin Page divorced in 2001, but she spoke with Page's father after Sunday's killings.

His father said he had tried calling his son about three weeks ago, but never received a return call, the Fox news reported. 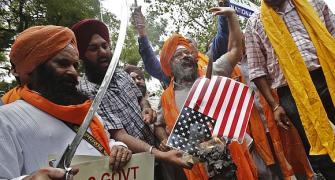 'Why are these stupids in India burning the US flag?'
Sikh killings in US and the sense of white supremacy
Sikh shooting: US flags to fly at half-staff till Aug 10 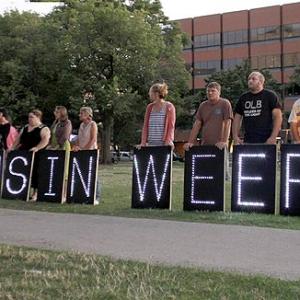