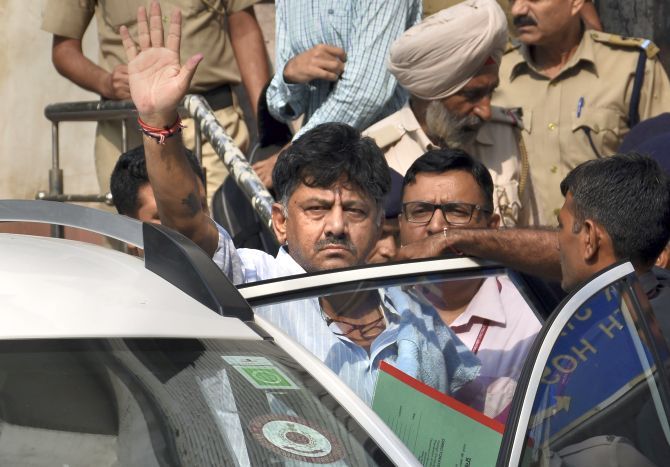 The Delhi high court on Thursday castigated the Enforcement Directorate after a junior counsel represented its case for some time due to delay in arrival of a senior law officer during the hearing on the bail plea of Karnataka Congress leader D K Shivakumar.

"You cannot play hide and seek with the court," Justice Suresh Kait said, adding, "This is not the way. This is not acceptable. Court is not supposed to wait."

He made these hard-hitting remarks when the junior counsel appearing for the ED sought accommodation for 30 minutes on the ground that the law officer was busy in Rouse Avenue district court.

Justice Kait had reserved the order on the bail plea asking the ED to file written submission by 12 pm of October 19 but later, allowed the agency to commence arguments after Additional Solicitor General K M Natraj arrived and apologised for the delay.

The ASG met the judge in his chamber, followed by senior advocate Abhishek Manu Singhvi who was representing Shivakumar after which the court agreed to hear the ED and later reserved the order.

Accepting the apology, the judge heard the contentions of the ED which opposed Shivakumar's bail plea saying he was an influential person and if released, he could tamper with the evidence and influence witnesses.

Shivakumar, 57, was arrested by the ED on September 3 in a money laundering case and is lodged in Tihar jail under judicial custody.

The ASG argued that Shivakumar and his family members have acquired more than 300 properties in the past and the investigation in the money laundering case was going on.

"The main issue pertains to source of money which is not being disclosed. If a person is unable to explain the source, just by making payment or giving declaration to the Income Tax department, the ill gotten money cannot be converted to white money and IT department is not authorised to regularise it," he said before the judge who reserved the order.

The ASG said this was a 'classic case' of laundering of money and added that Shivakumar was evasive in his replies and was not answering properly and he will hamper the probe, if granted bail.

Natraj, along with central government standing counsel Amit Mahajan, said summons were issued to 14 people during investigation and statements were recorded and the prosecution complaint (charge sheet) was yet to be filed.

The law officer said 317 bank accounts have been operated by Shivakumar and his associates in the transaction.

He has acquired 24 agricultural properties, his brother has 27 and mother has 38. The assets declared before the election commission and IT authorities is Rs 800 crore, he said, adding that Shivakumar's daughter who had just completed graduation has declared Rs 108 crore assets.

Shivakumar, a seven-time MLA in Karnataka, was arrested by the Enforcement Directorate (ED) on September 3 for the alleged offence under the Prevention of Money Laundering Act (PMLA). The 57-year-old Congress leader is currently lodged in Tihar jail under judicial custody.

He has approached the high court challenging a trial court's order denying him bail in the case.

The ED had in September last year registered the money laundering case against Shivakumar, Haumanthaiah -- an employee at Karnataka Bhavan in New Delhi, and others.

The case was based on a charge sheet (prosecution complaint) filed by the Income Tax Department against them last year before a special court in Bengaluru on charges of alleged tax evasion and 'hawala' transactions worth crores or rupees.

The I-T department has accused Shivakumar and his alleged associate S K Sharma of indulging in transactions involving huge amounts of unaccounted money on a regular basis through 'hawala' channels with the help of three other accused. 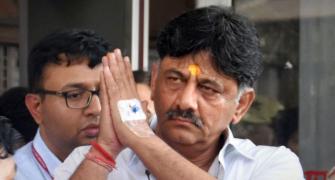 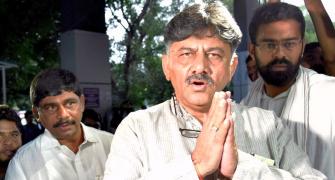