Five reasons why UPA-2 is floundering

By Sheela Bhatt
Last updated on: May 22, 2010 18:18 IST
Sheela Bhatt assesses the United Progressive Alliance-2 government's one year in office.

In 2009, when the Congress party won 206 Lok Sabha seats to emerge victorious after a difficult general election battle, there was amazement. And hope. A year later, the Congress party-led United Progressive Alliance appears defensive.

The challenge to the government is from within -- not from outside. Yet, hope is conspicuous by its absence. The firm grip on power is missing. The reasons are not difficult to find.

Five reasons why UPA-2 is floundering

One, the economist prime minister-led government is losing its shine due to the unusually high inflation of 17 percent.

Two, in July 2009, Prime Minister Manmohan Singh took a bold step by signing an agreement with his Pakistani counterpart at Sharm-el-Sheikh, Egypt. But his Congress party forced him to water down the spirit behind the agreement where India gave Pakistan diplomatic space in anticipation of better ties.

In the early days of the UPA-2 government, that event revealed that Congress party president Sonia Gandhi and the party's popular mood would prevail in the India-Pakistan relationship.

Three, in December 2009, the UPA's wise men blundered in response to the agitation for a separate state of Telangana. It showed that the government in New Delhi was disconnected from the people's thinking. This winter, the Telengana agitation is likely to recommence and put the government in a bind.

Four, Dr Singh's inability to take action on the corruption charges against Telecommunications Minister Andimuthu Raja has shown Congress party bigwigs just where the buck stops in this coalition.

Five, Singh's Cabinet seems disjointed. The government had declared that its ministries would set an agenda to take action in its first 100 days of power, but even after 365 days, most ministries are struggling with the same old issues of governance.

Air India is on its deathbed and Aviation Minister Praful Patel, who belongs to the Congress party's ally, the Nationalist Congress Party, is the only one being blamed -- as if the prime minister has no role to play in saving India's national airline.

Sam Pitroda, the prime minister's adviser on innovation and technology, complains that his ideas are not moving quickly. Congress party leaders find that the prime minister is not assertive in reining in ministers who belong to UPA ally parties or even his own party.

When skyrocketing food grain prices became an issue, the Congress party blamed Union Agriculture Minister Sharad Pawar, who heads the NCP. But issues like fixing the minimum support price of foodgrain for farmers and the decision to import/export essential commodities is the government's collective responsibility.

In this blame game, India is the loser.

UPA allies versus the Congress party

On the issue of the Maoist insurgency, the Congress party has found an excuse to ward off flak: It is the state governments that have failed in providing development and providing security to the people who live in Maoist areas. In the process, the spirit of India's federal structure wanes.

The Congress's allies complain that the Congress party is playing big brother. A Union minister of state and member of a UPA ally told rediff.com: "Is it UPA-2 or the Congress government? The Congress decides everything by itself. We are informed about issue like the women's bill, the food (security) bill and education bill only when the nation is told about it."

Also behind the federal government's problems are the Congress party's political dynamics in states like Maharashtra and Tamil Nadu and the party's ambition in states like Uttar Pradesh, Bihar and West Bengal. Assembly elections in Bihar (November 2010), West Bengal (June 2011) and Uttar Pradesh (March 2012) will impact the UPA-2 government's agenda and even the smooth running of Parliament.

The Congress party's allies enjoy power without subjecting themselves to any notion of moral conduct, discipline and accountability. In the public eye, that makes the prime minister seem less assertive.

In his sixth year in power even Dr Singh's image of an honest leader is losing its sheen because he is increasingly seen as someone ready to tolerate dishonesty in the Cabinet and in his government.

The Congress party blames it on its allies's lack of ethics and political opportunism.

"UPA-2 is not as stable as UPA-1 because our allies are opportunists," says an influential Congress leader and member of the powerful Congress Working Committee. "In the last government (2004 to 2009) we had ideological differences with the Left parties, but they were committed to the idea of stability for the good of the country. It is not so now. We have never seen anything like this."

Power-sharing and the heir apparent

In the UPA's last term, the exclusive political arrangement of dual centres of power worked well between Prime Minister Singh and Sonia Gandhi; the former ran the government, the latter handled the political management of the coalition. Now it seems the duo needs a new arrangement of power because the current coalition is more problematic than the last.

The government, for instance, is debating if the ongoing census should include caste data. There seems an absence of leadership on such a divisive, sensitive issue. No one knows if Dr Singh or Sonia Gandhi backs the idea. The dual power centre agreement does not allow Prime Minister Singh to tackle politically sensitive issues.

Another sensitive issue is Rahul Gandhi. Many Congress leaders privately debate that Sonia Gandhi's son and heir apparent has to identify with a cause, and work aggressively and openly for it.

Then prime minister Indira Gandhi took on her rival Morarji Desai by nationalising banks. That act and the abolition of the privy purses (the government stipend for former royal families) helped her create her own brand of politics.

Indira Gandhi's son and Rahul's father Rajiv Gandhi rode to power on the dreams of a modern, tech-savvy India. Today, Rahul Gandhi travels to India's villages and universities without a cause, points out a senior Congress leader.

According to the Congress party's internal assessment, it has just some 18 months to implement big ticket ideas. One glance at the upcoming state elections is enough to convince any experienced political observer that UPA-2 may end up looking like a mere shadow of UPA-1.

There are many factors responsible for it, but the foremost is the political undercurrents and the emerging perception that India's biggest political party is in transition mode. 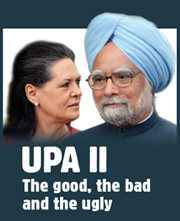 Last week, a Hindustan Times report detailed how Planning Commission Deputy Chairman Montek Singh Ahluwalia made a detailed presentation to Rahul Gandhi, stating that the government could provide nearly 35 kg of foodgrains at Rs 3 per kg to the poor. This implies that Rahul is at the centre of policymaking in India. On the vital issues of health, education and development, Congress leaders have started speculating about the 'Rahul line'.

On the issue of food security, there is a divide between the government and the Congress party in deciding the quantity of food to be disbursed when the food security law is passed to ensure cheap food for India's poor.

To sort this issue out, no less than Ahluwalia, the prime minister's trusted economic lieutenant, made the presentation to Rahul Gandhi.

Evidently, Sonia is ensuring that Rahul remains in the policymaking loop. She is also trying to ensure a smooth transition of power to her son at a time suitable to the family. This is a delicate and difficult political job.

The Congress party wants to ensure that no government decision dents its vote bank, particularly the poor, the Dalits and the Muslims who returned to the party fold in the 2004 general election and more so in 2009. Its pro-common man image is sacrosanct because for the Congress party, the future (Rahul) is far more important than the present (Manmohan Singh).

Sonia Gandhi has ensured that Dr Singh's ideas on the economy, economic and governmental reforms, tackling security matters, India-Pakistan relations or the fundamental issues of the government's approach to development take into account the Gandhi family line.

The Congress still nurses the idea of a single party government in the future. Hence, it is likely to go it alone in the UP and Bihar state assembly elections. These are important decisions affecting regional leaders. During the cut motion (which gives every lawmaker the right to vote on a federal bill's provisions) on April 27, the parties of Mulayam Singh Yadav (Samajwadi Party, 22 Lok Sabha seats), Lalu Prasad Yadav (Rashtriya Janata Dal, 4 seats) and Mayawati (Bahujan Samaj Party, 21 seats) saved the government.

But these three leaders will sulk or deny the Congress support as the assembly elections in Bihar and UP come closer.

Inside the government, the Congress party does not really trust its allies like Sharad Pawar and Trinamool Congress Party chief Mamata Banerjee.

In dealing with the Dravida Munnetra Kazhagam in Tamil Nadu, the Congress party is on thin ice because its party infrastructure in the state is no match to the DMK. In the future, when the Congress party loses the BSP's support, the DMK's 18 seats will remain a pillar of strength for UPA-2.

That is why Dr Singh has to tolerate a tainted minister like the DMK's A Raja. Even Sonia Gandhi could not tell DMK chief and Tamil Nadu Chief Minister M Karunanidhi to replace Raja whose ministry faces a Central Bureau of Investigation inquiry for allegedly selling 2G spectrum cheap to mobile operators.

Growth: Panacea for all ills?

However, all is not lost for UPA-2. Time favours the government. Dr Singh and Sonia are enjoying a scam-free stint in power. And then there is Lady Luck: Indian entrepreneurs are doing well and keep the economy kicking.

But the most positive factor for the government is that all its rivals are struggling and disunited. Even after six years in Opposition, the Bharatiya Janata Party is not standing up to be counted. Its new president Nitin Gadkari has failed the party's expectations and is not taken seriously outside the BJP. A year after losing Election 2009, the BJP seems to be floundering on the ideological front.

Another issue helping UPA-2 is that the people's attitudes to price rise and corruption is changing. The government seems confident that economic growth can hide all ills. India's GDP growth is 7.2 percent this year, higher than predicted. The Bombay Stock Exchange's benchmark Sensex rose more than 2,800 points in the last 12 months.

Asked about price rise, a senior Congress leader and Union minister responded, "What price rise? On Akshay Tritiya day (May 16) people bought more gold than they bought on the same day last year. People are lining up outside private education institutions to pay huge fees and get admissions for their children. More than 100 million cell phones have been added in a year."

The government has taken ambitious steps in health, law, education and in taking up the challenge to feed poor families. The passage of the women's reservation bill by Parliament's Upper House, the Rajya Sabha, has given Sonia Gandhi an edge.

"I don't think the Congress or the UPA is in trouble," says a former Congress leader. "Political factors are conspiring to help the Congress. The BJP is missing (Atal Bihari) Vajpayee's grip on the Indian psyche and (L K) Advani's manipulative capacity. The Congress are the new Mughals who know they are destined to rule. They are focusing on welfare programmes to reach out to the Dalits, the tribals, the Muslims and the poor. They are taking America's help to instill sense into Pakistan and they are painting Rahul Gandhi's brand image well. Who says they have failed in the first year of their second term?"