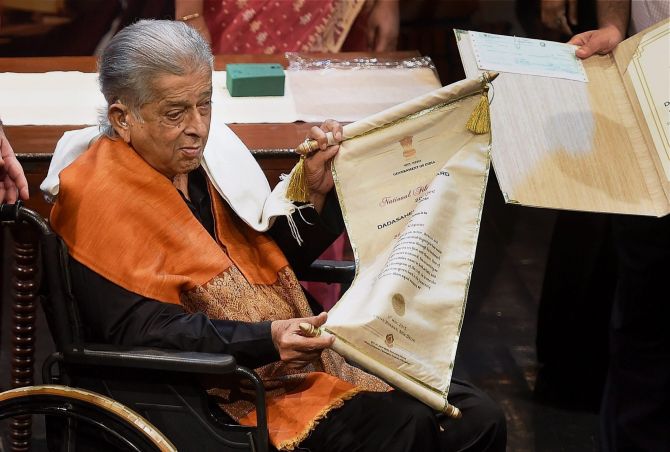 Kapoor, the younger brother of iconic actors Raj Kapoor and Shammi Kapoor, could not travel to Delhi because of his ill-health for the award ceremony which was held on May 3. Therefore, the Minister came to Mumbai to give away the award.

"It is indeed an important moment as one of our veteran actors is getting the award. It is conferred on Shashi Kapoor, who is undoubtedly a versatile personality Indian cinema has ever produced... an actor par excellence who competed with the best and carved out best work as actor, producer and director. We are presenting this award symbolically at the institution he created," Jaitley said after giving the honour.

The 77-year-old actor is the third person from the Kapoor family to receive the honour from the government, after his father Prithvi Raj Kapoor and elder brother Raj Kapoor.

"The way the Kapoor family is producing talent, I am sure this award is not the last one (for the family)," Jaitley said.

"I wish him an improved health... long life... best in life," the Minister said.

Wearing a black outfit and an orange shawl, Kapoor arrived at Prithvi Theatre on a wheel chair.

Jaitley presented him a citation, shawl, medal and a cheque.

Kapoor folded his hands and smiled at everyone after receiving the award. He got a standing ovation from everyone present at the function.

The event was moderated by noted actor and Kapoor's nephew Rishi Kapoor.

An audio-visual presentation of Kapoor's cinematic journey, from a child artist to a lead actor, producer and a theatre personality, was shown.

It had a voice-over by Ranbir Kapoor and senior actors Amitabh Bachchan, Rishi, Shabana Azmi and Randhir Kapoor, who shared their experiences about Kapoor.

Prithvi theatre, founded by Kapoor in the memory of his father Prithviraj Kapoor, continues to be nurtured by the actor's daughter Sanjana.

Born on March 18, 1938, to the illustrious and formidable theatre and film actor Prithviraj Kapoor, Kapoor hit the spotlight at the age of four acting in plays directed and produced by his father. He started acting in films as a child in the late 1940s.

His best known performances as a child artist were in Aag (1948) and Awaara (1951), where he played the younger version of the character played by Raj Kapoor. Kapoor also worked as assistant director in the 1950s.

Kapoor made his debut as a leading man in the 1961 film Dharmputra and went on to appear in more than 116 films during 60s, 70s and until the mid 80s.

Some of his memorable films include Deewar, Kabhie Kabhie, Namak Halal, Kaala Pathar and others.

The actor is wheelchair bound and has been ailing from kidney problems.

He was honoured with Padma Bhushan in 2011.