Twenty-five people were killed and 50 others injured when two express trains passing each other derailed while crossing a railway bridge struck by flash floods in Harda district of Madhya Pradesh in the dead of night sending 17 bogies and one engine tumbling into a rain-swollen river.

The state government had earlier given the figure of dead as 29. But later Chief Minister Shivraj Singh Chouhan, at a press conference in the presence of Railway General Manager Ramesh Chandra, put the figure of deceased at 25 (11 identified and 14 unidentified).

The twin derailment that occurred at around the same time at about 11:30 pm on Tuesday night involved the Varanasi-bound Kamayani Express from Mumbai, which capsized first, and the Mumbai-bound Janta express originating from Patna that was coming from the opposite direction. 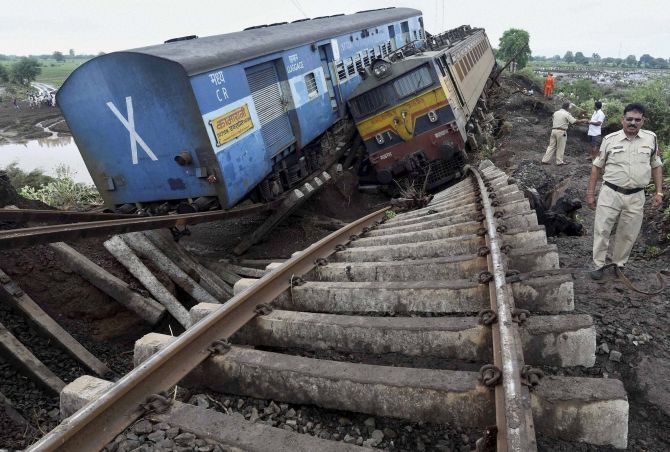 Wreckage of Kamayani Express and Janata Express trains which derailed within minutes of each other while crossing a small bridge at Harda, MP. Photograph: PTI

Officials said that 25 people were injured and over 250 passengers have been rescued.

There were conflicting versions on the exact number of casualties in the accident that occurred between Khirkiya and Bhirangi stations on Khandwa-Itarsi sections, 160 km from Bhopal after the 500-metre rail tracks over a small bridge sank in sudden surge of water caused by heavy rains in the area.

Divisional Railway Manager, Bhopal, Alok Kumar said, "We have found 11 bodies in Janata Express and one in Kamayani Express. About others we are not sure -- whether they were from nearby villages and victims of the flash flood (or railway passengers).

The railway will revise the figure once all the bodies are identified, he added. "If their relatives identified them and if it was found that they belong to villages near the site then it would be construed that they are not passengers. Otherwise we will count them as victims of mishap," he said. The railway ministry has ordered an inquiry into the twin derailment and announced an enhanced ex-gratia of Rs two lakh each to the next of the kin of deceased.

Officials said over 250 passengers have been rescued.

There were conflicting versions on the exact number of casualties in the accident that occurred between Khirkiya and Bhirangi stations on Khandwa-Itarsi sections, 160 km from Bhopal after the 500-metre rail tracks over a small bridge sank in sudden surge of water caused by heavy rains in the area.

While the Madhya Pradesh government spokesman earlier stated that the death toll was 29, Railway Minister Suresh Prabhu, however, told Parliament that as per available information 12 passengers were killed. Police and members of the rescue operation at the site of a train derailment near Harda, Madhya Pradesh. Photograph: ANI/Reuters

Prabhu said that a flash flood caused the swollen Machak river to overflow and wash out a section of the rail tracks, leading to the derailment of the two trains.

"The prima facie cause of the incident is stated to be 'flash flood due to heavy rains'," Prabhu told the Rajya Sabha amid the din by slogan-shouting opposition members.

Passengers said they were thrown awake by the falling bogies which quickly filled with muddy water,

"We felt the jerk instantly. When we opened the door and checked, there was water everywhere. In no time, the train tilted. And we all got trapped and were stuck for three hours," a survivor said. 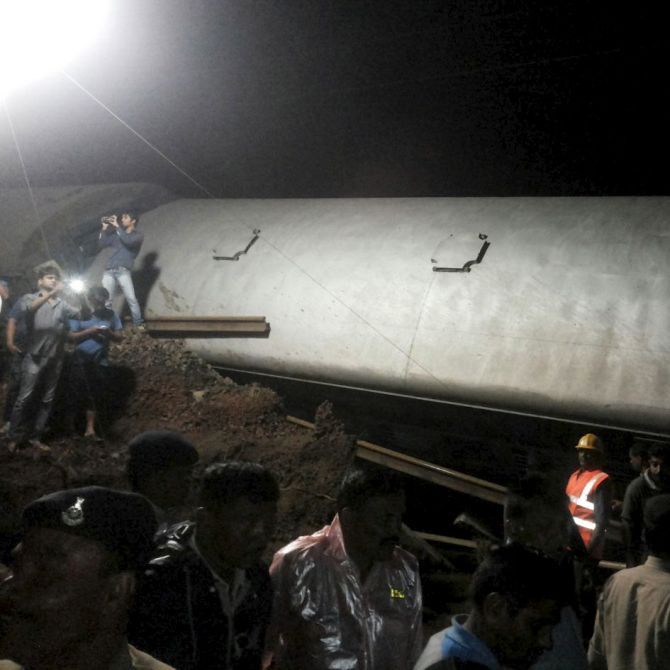 Police and rescue officials rushed to the spot and were able to rescue over 250 people. Photograph: ANI/Reuters

"The water level on the track was almost waist-high," said another survivor.

A PTI correspondent at the site saw some bogies lay fallen on one side and others leaning in the mud. Tracks were broken, uprooted and scattered, and a detached train wheel was visible in one section.

Though the MP government said that 21 coaches of the two trains derailed, Alok Kumar said seven bogies of the Janta Express plus engine and 10 of Kamayani Express had derailed.

"Prima facie it appears that the cause behind the mishap was heavy rains that was never witnessed in Harda region in my recent memory. Due to it, base material under the tracks got washed out and the overhead contact of the engine got disconnected because of which the trains got stranded on the tracks over the bridge on Machak river," Chouhan said.

The railway ministry has ordered an inquiry into the twin derailment and announced an enhanced ex-gratia of Rs two lakh each to the next of the kin of deceased. Commissioner, Railway Safety (Central Zone) will conduct the inquiry.

Prime Minister Narendra Modi also announced an ex-gratia relief of Rs two lakh for the kin of each of those killed in the twin train derailments.

Railway Spokesperson Anil Saxena said just eight minutes before the accident, two trains had crossed that section and their drivers did not detect any problem.

Services of more than 50 trains were affected due to the mishap as many were diverted and short-terminated.

The 500-metre rail track which caved in not among the vulnerable sections identified by the railways during monsoon, a top Railway official said.

Railways undertake pre-monsoon preparation every year on vulnerable section as precautionary measure and the derailment spot was not among those identified sections, Chairman Railway Board A K Mital said in Delhi.

Blaming the sudden surge of water as possible cause of the derailment, Mital said, "One cannot rule out natural calamity and the flash flood caused extensive damage to the track which resulted in the derailment. The track was otherwise alright and two trains crossed the track just eight minutes before the incident."

Ruling out any defect in the bridge, Mital said there was regular patrolling on the section and no train is allowed to cross defective bridge.

Asked whether the typical soil of the area played a role in breach of tracks, Mittal said black cotton soil of the area was strengthened before laying the track as a standard procedure for rail laying process.

Meanwhile, a West Central Railway release said that following the mishap, 15 trains were cancelled, three were partially terminated and 82 trains were running via diverted route. NDRF and rescue officials inside a bogey which derailed. Photograph: ANI

In view of the twin train accidents, MP Chief Minister Shivraj Singh Chouhan cancelled his scheduled tour to Ujjain and rushed to the mishap site.

The CM also announced an ex-gratia of Rs two lakh each to the kin of the deceased passengers, Rs 50,000 to the seriously injured and Rs 10,000 to those who suffered minor injuries in the accident, he added.

This is not the first fatal train incident in the country this year. A number of public figures have spoken out against what they deem the unsatisfactory safety conditions of India’s railway system, one of the most heavily trafficked in the world.

The railways has also set up helpline numbers:

Many express trains on the route have been diverted due to the major mishap. 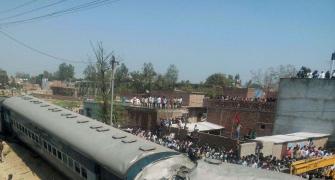 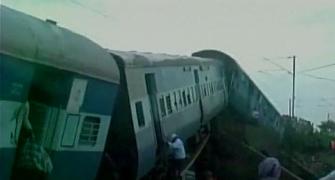 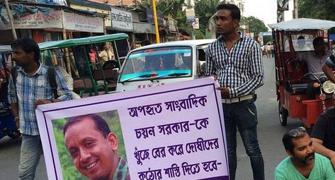 Kidnapped or in hiding? Where is Bengal scribe Chayan Sarkar? 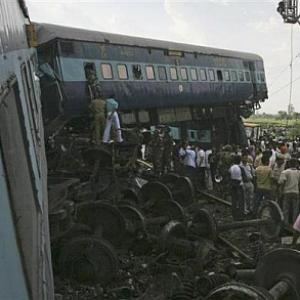 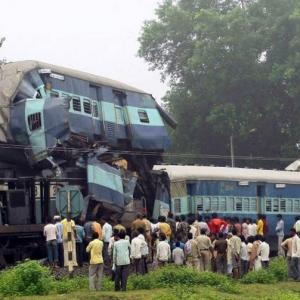