Separate Telangana possible ONLY with us: BJP

Seeking to boost the Bharatiya Janata Party's chances in the by-election to Parkal assembly seat in Telangana region, party Member of Parliament and official spokesperson Prakash Javadekar on Sunday said separate Telangana is possible only with the BJP.

Javadekar, who campaigned in support of the saffron party's nominee at Parkal in Warangal district, said separate statehood is neither possible with a sub-regional party like the Telangana Rashtra Samiti, which has only two MPs, nor with the Congress.

"We had promised three states and we created three states (during the National Democratic Alliance regime). Now, we are promising Telangana and we will create it. We are not like the Congress. They promise one thing and do exactly the opposite. It is not our style. We say what we want and we deliver what we say," he told reporters.

BJP, which is in the forefront of separate Telangana agitation, had sprung a surprise by winning the by-poll to Mahabubnagar held in March.

BJP's victory in Mahabubnagar was seen as a setback to TRS as the constituency is represented in Lok Sabha by its president K Chandrasekhar Rao.

The by-polls in Parkal will be held on June 12 along with 17 other assembly constituencies. Parkal is the only seat in Telangana region where by-elections are going to be held.

The by-poll has been necessitated in Parkal due to the disqualification of the sitting Congress MLA, who switched loyalty to Kadapa Member of Parliament Y S Jagan Mohan Reddy and voted against the Congress government during a floor test in December.

Parkal is witnessing a multi-cornered contest for the by-election among the candidates of Congress, TDP, BJP, TRS and the YSR Congress.

Though the BJP has fielded candidates in other constituencies too, it has a chance of giving a tough fight only in Parkal due to its strong support to the separate statehood cause. 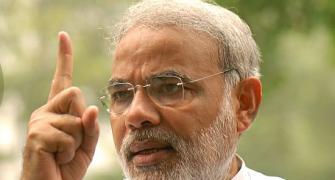 Why only Modi? BJP has many PM candidates: RSS
CBI quizzes Jagan, MLAs queue up to join him